Okay—so as epic journeys go 2000 km (round trip) isn’t that epic. And we didn’t even get that far off the beaten path. Though when we told a few Aussies that we were headed toward the outback they seemed more than a little surprised. It seems most people go to the beach, or a city or the mountains for holidays. But Ev’s mum Gail was with us and she was keen for an adventure. So we set off with the goal of seeing (and doing) a bit of everything. 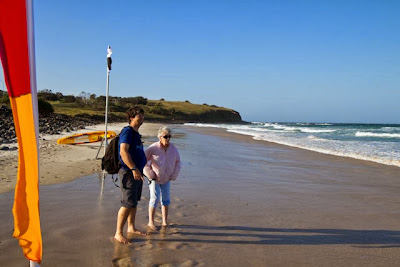 Our first stop was the NSW surf town of Ballina (which turns out is pronounced Bal-lin-na not Bah-leen-ah, or even Bah-een-ah.) I guess the Spanish/French influence is a bit diminished here… Every time we do something new in Australia it seems like it comes with a whole new vocabulary. And as we passed turnoffs for towns like Mummelgum, Dingadee and Dirranbandi we decided on a new rule: if we couldn’t (sort of) pronounce a name without assistance, we weren’t going there. 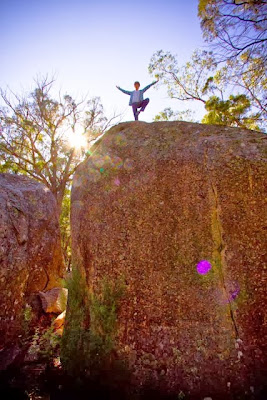 After a dip in the ocean we continued on, mispronouncing our way across the Great Dividing Range to Girraween National Park. Happily Girraween is easy to say because the huge granite outcroppings and lovely wineries would have been unfortunate to miss! Then it was on to Moree (go ahead, give it a go) where we soaked off the bumpy miles in the bore baths, aka hot springs.

I think we’ve mentioned that Australia is expensive and our disposable income is already spoken for. So our road trip wasn’t luxurious. In fact, I may have rented us the cheapest campervan in the country. And with a few hundred thousand kilometers on Big Red, a door that alternatively fell off or got stuck while open (or closed), and a sad lack of shock absorbers it was a pretty uncomfortable excuse for transportation.

But after the second long soak we crammed Gail and Maia into the way back and continued toward our goal: the opal mining town of Lighting Ridge. Honestly? I’m not sure why this was the goal. Maia wanted to go to Coober Pedy, Ev wanted to see the outback, Gail wanted to see a bit of the country and I like shiny things. So Lightning Ridge seemed the logical choice.
There are a lot of dead kangaroos between Brisbane and Lightning Ridge. Recently there was a local headline, “Kangaroo Kills Girl”. The tragic story went on to describe a kangaroo bounding across the road, through the front windscreen and then out the back window; as though it was intentional. The truth is the bitumen (fancy Aussie word for road) holds heat at night which attracts animals and if you drive at night: bamm! Big Red wasn’t insured to be on the road after dusk, and considering the slaughter (we went through sections where there were dead kangaroos, emus and foxes every few meters) this was a good thing.

Despite containing our driving to daylight hours, we eventually made it to the Ridge and secured a campsite at the Crocodile (that’s local speak). From there we headed out to explore. With thousands of miners each inhabiting 50 meter square plots, the Ridge looks a bit like a moonscape. The really fascinating bit is when you take a tour underground. We chose to visit the Walk-in Mine (there was a particularly touristy mine that had been turned into an art gallery—but it seemed a bit too weird for us…) Down in the mine the tunnel was larger than I expected, at least for an opal mine I was told was dug by hand and once entered through a drainage tube. When I brushed my fingers along the seam, where the chunky red rocks might hide gems, I joked about accidentally knocking free an opal and pocketing it. The comment brought a dirty look and a lecture from Maia, “That would make you a ratter.”  Ratter is the name of a person who steals from another miner. 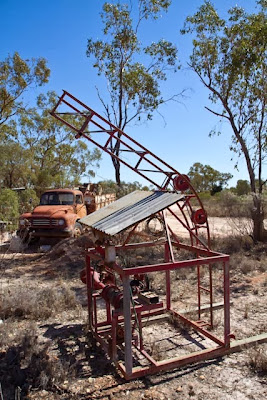 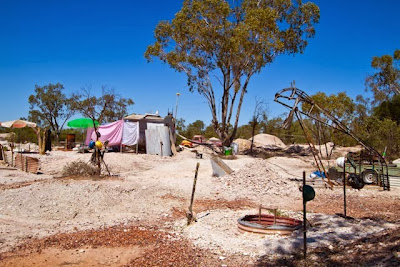 After seeing the mine and learning how to identify opal we had a go at fossicking (see what I mean? It’s a whole new language…).  Noodling through the scrap heap  we kept an eye out for potch: a grey form of opal that indicates some of the colourful stuff might be near.

Maia did a great job of searching and found a few pretty pieces and then she and Gail befriended an opal cutter who gave Maia a big bag of rough opal to polish up herself. It turns out my only opal skills occurred in the shops—where I discovered how to trade money for them.

After a couple of days broken up by cool interactions with locals and a wonderful night time soak in a bore bath (nothing like looking up at the stars from a hot spring while kangaroos nibble the grass around its edges) it was back into Big Red and back on the road for the return voyage.

Wow, what an awesome trip, hope you all enjoyed the experience and are keen to have a look around at other places.
Australia is such a diverse country, beach, desert, mountains, snow, rainforest,big cities,small bush towns that time forgot,so much to explore
Hope you have a great visit with such an intrepid traveller. :)

Doug and Carla Scott said...
This comment has been removed by the author.
11:38 AM

Sounds like a wonderful road trip with a language lesson thrown in. Love it!

Thanks Margaret, It was a fantastic trip. So glad we had the chance and really loved having Gail along for the journey!
Thanks Carla, It was a blast. I love hearing the language here. Sometimes it almost sounds like English ;)

Wonderful work right here on. I read a great deal of blog site messages,
however I never ever listened to a subject like this.
I Love this topic you made concerning the blog owner's bucket checklist.
Really resourceful.Treat your sims to a day of pampering with the sims 4 spa day. Coming to interesting game sims 4 cheats on Xbox one