Imagining Her in Fiddler's Green 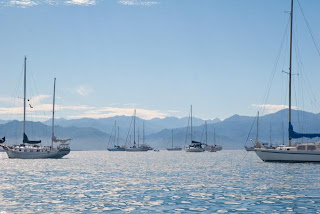 This is part of a post I wrote almost two years ago--but on learning of the loss of Diana Jessie I decided to republish it.
The sailing community, like any specialized community, is a small one. But the way it circles back on itself, over and over, never ceases to amaze me. We have an old marina neighbour and dear friend who blogs as Boatbaby and a few years ago, through her, we heard about Behan on a boat called Totem. "There are kids on a boat called Totem that’s sailing in Mexico", I told Maia as we made our way down the coast and she was moaning with loneliness. "We may not meet them, exactly. But on their blog they mention lots of other kids are cruising in Mexico. So you will meet cruising kids when we get south", I told her, "You won’t be alone forever."


Then one morning on the net we heard Totem was in La Cruz bay, but had guests aboard. We didn’t want to disrupt their visit, so left searching them out for another day. But later that afternoon we saw someone we recognized roaming the dock—a sailor called Jim Jessie.

Last time we went cruising we were fortunate enough to meet Jim and Diana Jessie. Diana was a writer I admired and her generous help (over Sunday Gin Fizzes and long walks) got me started on my own writing path. I was excited to see them again and I wanted to thank and let her know where her help had led. So I plotted with Evan about how to hunt them down and say hello. 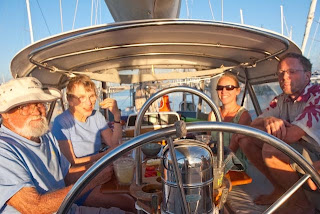 Diana will be dearly missed by many in the cruising community. Her generous help, enthusiasm and strongly held opinions have given many women the confidence to head out and explore the world--not simply as long-suffering mates but as sailors: Joyful, confident, competent sailors. What a remarkable legacy.

What a sad loss for the cruising community--I never met the Jessies but used to read her column every month.

Hello! My first visit, will visit you again. Seriously, I thoroughly enjoyed your posts. Congrats for your work. If you wish to follow back that would be great I'm at http://nelsonsouzza.blogspot.com
Thanks for sharing!