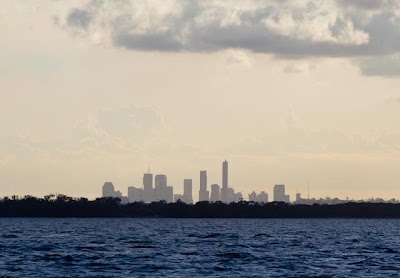 From Mooloolaba (can’t believe I missed posting about my fantastic b-day which included a day at the zoo and an amazing dinner on Catachaos…) we sailed into Morton Bay and on to Brisbane River. Anchoring near the river mouth at sunset we could see the city’s high rises glowing in the distance.
“It really is a city.” I said to Evan. 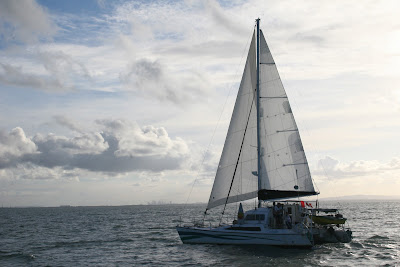 After not seeing one for a while, cities can become mythical places. They seem unreal. And the next morning while winding our way up the river—watching as the landscape changed from wilderness, to industry, to suburb, to metropolis—reality, our reality, began to kick in.
I’ve never felt as small on my boat as I did as we motored up the river past the city centre. Even in the middle of the ocean, on the worst days, our boat felt bigger. But here—against the backdrop of modern glass and steel I felt like our story shrank and became ordinary. And rather than being a magic ship that carried us through wondrous places our boat simply looked grubby and fragile.
We looked for a place to anchor; overwhelmed as we bypassed all the options until we reached a low bridge and could go no further. So we consulted with C4, who were in an equal state of dépaysement, despite this being their home country, and we dropped our anchors—here at the edge of the botanical garden, where the greenery and bird song can almost convince me that my million neighbours are an illusion.


I never made it to shore that first day.
And on the second I failed to leave the confines of the botanical garden.
By the third day I was ready to put on real shoes and venture into the downtown streets in search of groceries and clothes pins.
And by today I was ready to explore.

Dépaysement fades. And unfamiliar places become comfortable. And Brisbane seems like it might be a nice place to call home. 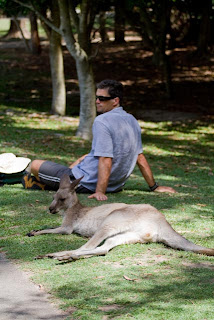 If you arrived before evening on the 3rd, you might have been serenaded by Stevie Nicks & Dave Stewart from the River stage if you were anchored near the gardens! Welcome to our fair city :D There are so many great things to see & do here, how long are you staying?

We were serenaded--it was fantastic! Thanks for the nice welcome. We'll be here for a few months--at least.

Hey Evan, Mom said that you tried to email me but I didn't get it...try

Excellent Evan! Brisbane is a terrific place with tons on offer... You'll love it here :) I've enjoyed reading about your travels across the Pacific... Look forward to seeing how you enjoy life in Oz!