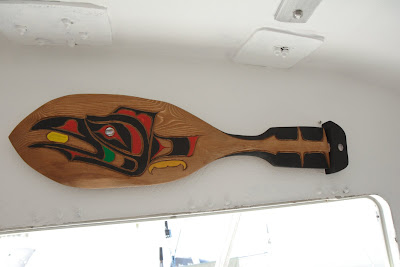 Sailors tend to be superstitious people. It's probably because crossing oceans used to be such a risky and uncertain activity, but early sailors seemed to think if they followed a few rules they'd see land again. We, of course, know that it's more about having a wellfound boat and the skills to run the thing that keeps you off the rocks. But we can still rattle off a few beliefs we've heard through the years:
Most of our sailing friends claim they don't believe these things. Heck, we claim not to believe them. But we did have a proper renaming ceremony aboard Ceilydh to get rid of a name that ended in an "a", and we painted underwater eyes on the hull on so she can see where she's going, and the only times we set sail on Fridays, well, it's gone badly...

Somewhere along the line I decided rather than fighting superstitions, we'd embrace them. All of them. Which is why if you visit our boat you'd discover we have a Mayan corn god in the galley (to ensure we never go hungry) an Aztec sun god near the door - for happiness and health, a few versions of Yemaya who is known as Queen of the Ocean, a Huichol Indian carved Virgin Mary, a Ganesh (dipped in the river Ganges for extra protection) and a few other assorted gods, goddesses and spiritual items. 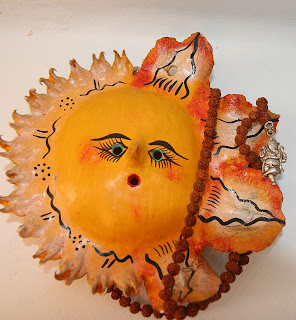 Most recently we added a carved raven paddle to the collection. Paddles carved by First Nations people on the North Coast are said to help ensure a boat will always find its way home again. But we got the paddle because it's a beautiful piece of art. Really.