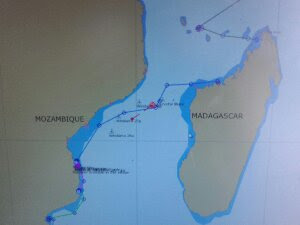 I hope you make it in this weekend, because Monday does not look good along that coast. Sorry there is no real Halloween for you if you make it in tonight. I hope to visit you in Cape Town, if you are there in January and/or February. My home town is East London, and while not the most attractive city, if you have to duck in there to avoid a SWester, the river mouth harbor is very safe and there is a small yachting community. Please visit the Natural history museum there to see the original coelacanth, plus an early therapsid, and early human foot prints, among many other things. If you can tolerate visiting zoos, they sometimes have lion cubs that you can play with. And the aquarium used to have a good seal show. Hugh