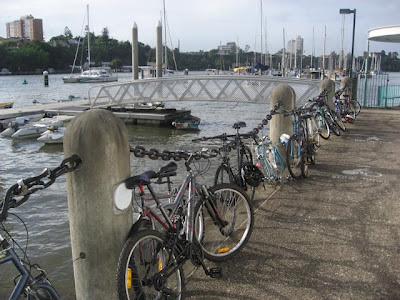 Boats and bikes, despite all the expensive fold-up, rust proof, light-weight wheeled contraptions to the contrary, just don’t go together very well. Or maybe they do—but we’ve never been that successful at making the combo work…

We had bikes on our first boat. The two of us were cycle commuters and couldn’t imagine traveling without bikes. So we road tested all sorts of options and after finding that the folding bikes we could afford were too wimpy for hilly rides on rough roads, we settled on light-weight hybrids with quick release front and back wheels. I sewed storage bags for them and they found a home in a back locker—where they stayed.

Oh, they came out a few times—but the effort to load them into the dinghy, row them into shore, assemble them, set off on some road that was a death trap to cyclists and then afterward try to find a safe place to lock them up, or repeat the trip back to the boat meant that as our travels went on--we used our bikes less and less. We finally sold them off in the Western Caribbean.

This time, even though we have a bigger boat (easier storage) and a bigger dinghy (easier transport) we still know from lugging scooters and a unicycle to shore that, for us, the effort to cruise with a bike would outweigh the benefit of having a bike. And honestly, there are not that many places where bikes work that well—most places you can easily get what you need by walking and a lot of islands are just too hilly for bikes to be useful.

This said, we still like bikes, and still think that they are an excellent idea for cruisers who spend more than a few weeks in a given port. I just don’t think they belong *on* boats.

Some of my favourite marina setups have had bikes for cruisers to use. Sometimes the bikes are fancy but most of the time (at least in the kind of places we stay) they are beaters that were abandoned by previous cruisers. We’ve also rented bikes, been lent bikes and know other cruisers who have inherited bikes.
Our new bikes are what Maia calls ‘ugh’ bikes: Which means they are a) ugly and b) ugh is the sound you make when your mum shows you your new bike. They are also very inexpensive bikes—my lock is worth more than my bike—which makes them perfect cruiser bikes. So we’ll use our new ugh bikes while we’re here—and at some point when we carry on we’ll pass them along to the next cruiser who arrives in port.

Great to know! Thanks for sharing your experience.