This will be one of those mostly photo-free blog posts. Not because I don’t want to share my stupidity, but because my stupidity lead to something that would make for ugly pictures…
One of the first things we tell visitors who are coming to Mexico is to bring comfortable shoes, suitable for rough terrain. Even if they insist they’ll never leave the city, we explain that Mexican sidewalks aren’t for sissies and frivolous shoes really have no place here. 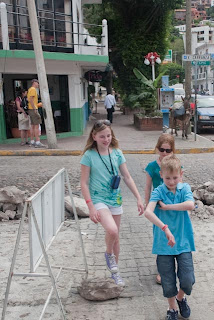 Then, once they get here, we point out all the dangers: crumbling pavement, stairs with big drop offs, loose cobble stones, collapsible sewer covers, leg eating gratings, washed out streets—that sort of thing. Once you get over the initial shock that people actually brave these hazards rather handily, and often in towering heels, you sort of forget about them. 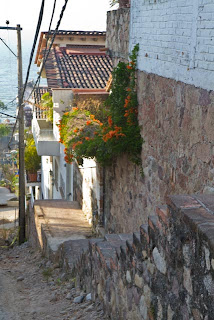 Which is how I found myself mid-intersection with my leg wedged up to my knee between the street and a metal grating.
Initially, my biggest concern was that I get myself removed from the street’s grasp quickly enough that I didn’t miss my bus. Then I realized I was sort of blocking the bus and it was dark, and there was a lot of traffic around. So my next concern was I extract myself before I was killed.
Once I was free I had other worries. My leg had a few large dents and less skin than I’d like, and it was also swelling and my toes had gone numb. I hobbled home with Evan and Maia watching me nervously but ended up looking better with a bit of first aid and a good amount of ice.
Now I just need something to treat my ego…

Owie, glad you are doing better. Those kinds of accidents make us appreciate our first aid knowledge and foresight to stock supplies, access to Info with our Interwebs, and healthy immune systems to help heal us quickly and cleanly.

ouch! didn't Evan also get attached by a Mexican sidewalk in La Paz? Good thing you guys are headed out to the Pacific, where it will be safe. ;-)

Slowly healing--over a week later and I'm still black and blue and have a good gouge out of me.
Behan, Ev did injure his ankle in La Paz last spring. I had forgotten! But he stumbled in the boatyard...