I’m a terrible one for developing expectations of a place. I can’t say I ever end up really disappointed—but it’s just I have a really vivid imagination, so very few things live up to my own mental hype. 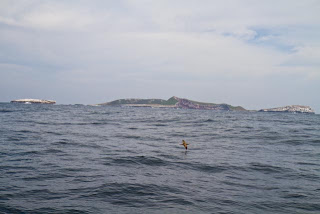 Isla Isabela looked like it might be one of these places. The guide books call the National Wildlife Preserve Mexico’s version of the Galapagos. And everyone we’ve spoken to has really loved it. We, however, have sailed by twice--both times unable to stop—either because of the weather or the hour (it’s not an anchorage to enter at night or in bad weather.) But this time we timed our arrival perfectly, we were early enough to hike the island and then have dinner before continuing south.
Isabela looks like a barren rock on approach. A barren rock that’s lousy with birds… In this respect it doesn’t seem much different than most of the islands we’ve visited this year. But once we were ashore we saw it was unique. I have never seen (or smelled) so many Frigate birds. They filled the trees, filled the sky and walked around on the ground beside us.
Trails crisscross the island and we headed through the jungle to the old volcanic crater (the source of the fresh water that supports the huge population) then around the crater lake and out to the bluffs.
Along the way we were treated to the sight of baby frigates peering out from their nests at us as well as the male frigates in full courting mode. 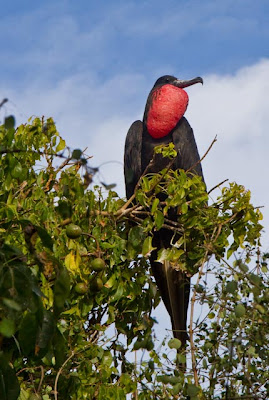 Out at the bluffs we encountered the blue footed boobies. We understood there were some chicks around—but only saw the nesting birds and the courting males. Perhaps the fact the frigates were dive bombing the nesting birds was keeping the chicks in hiding.
We got a bit lost on our return hike and came across one of the many teams of researchers that have visited the island since Jacque Cousteau first made it famous—as we spoke briefly to them (and were set back on the trail) I wished we had longer to ask questions and really learn about this wondrous island. 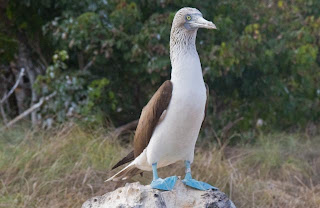 There is a wildness to Isabela that reminds us of all that is good in the world. And as we made our way back to the boat Maia spoke for all of us, “I’m so grateful we came here.” 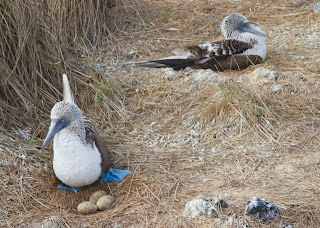 The birds are so amazing!!The colors are so vivid.