Bucerias—Festival of Our Lady of Peace

I’m not sure if every town in Mexico has its own patron saint (and corresponding festival and feast day) but if I had to guess, based on the number of fiestas we attend, I’d say yes…
The good thing is fiestas in Mexico are not ‘seen one fire works, seen them all’ type events. Each has a unique twist. Right now in La Cruz’s sister town of Bucerias it’s the feast of Our Lady of the Peace. The festival started nine days ago—we were told by one man that the church says you need to start celebrating nine days before a feast, not sure if that’s a direct edict, but who’s going to say no to a ten-day party? 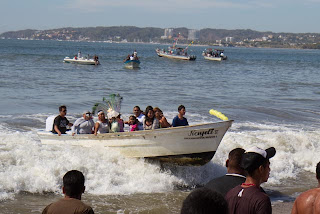 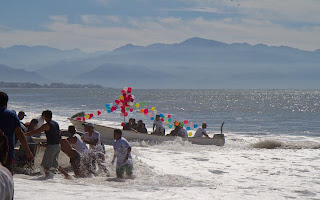 The tradition of our Lady of Peace tells that during a December night in the 7th century a miracle occurred when Saint Ildephonse entered the Cathedral of Toledo. He found the Virgin Mary sitting on the archbishop’s chair and as a gift she gave him a cloak. Ildephonse died on Jan 23rd, and the next day Jan 24th, was dedicated to remember the miracle. 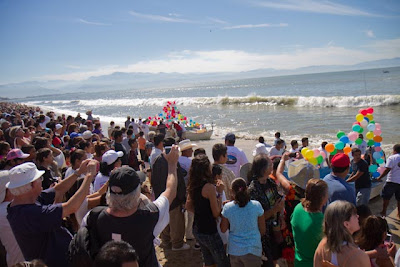 Somehow this tradition reached the tiny fishing town of Bucerias, which in 1948 was made up of just seven palapas. The town claimed the feast as their own and added a few things—a blessing of the fishing fleet (which is harboured in La Cruz) that happens at about noon on the 24th and some crazy fireworks, which happen later tonight. 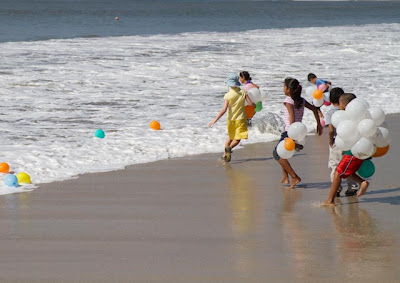 Maia and I headed over to meet the fleet today. While 60 boats were expected, the bay is running with a pretty good swell right now, so only a few dozen decorated and heavily filled boats arrived just outside the surf zone. 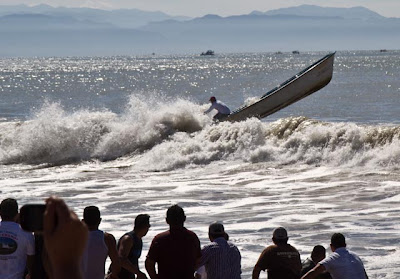 As fireworks were shot back and forth, a few of the boats made trial runs at the surf, then backed off and made mid-ocean transfers to reduce the number of passengers they had aboard. Finally they let fly at the beach. With engines roaring they rushed through the surf and right into the midst of the crowds (who tried to gage where each boat would land and run away in the right direction…)
There were a couple of near capsizes and a few near collisions, but with every fishermen for miles in attendance the face-saving recoveries were swift, even if they did lead to a few bruises.
Maia and I decided though that surf landing doesn’t look like that great an idea. And leaving looks even worse.

Those photos look like your taking them from the top of a boom, but is it that Diane is just that much taller than the locals? Look to the tall grey gringa!

Some of them are shot while I hold the camera way over my head, while a couple more are shot while I'm standing in one of the beached pangas.
But I am a tiny bit taller than the average Mexican;)
-d