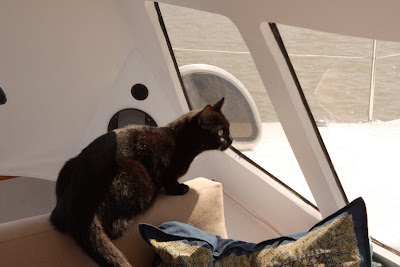 I know we were supposed to leave the docks a week ago – but in retrospect, the thought that we could move aboard Thursday and cut the dock lines on Saturday was unrealistic. On Saturday we were still buried in boxes and I couldn’t even find my coffee grinder – so we definitely weren’t ready to sail. 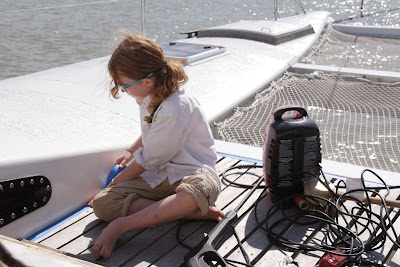 We also had a non-skid issue. Evan and I repainted the nasty looking grey decks with some fab paint he found on Craigslist. We assumed because the decks had such a textured nonskid finish that you could coat them in ice and they would still provide traction. So we skipped the step where you add extra non-skid particles to the paint. Ice may have been fine – but the paint wasn’t. When wet, our decks had the potential to be named in a lawsuit claiming a broken hip.
Ev liked the idea of painting in some far away harbour – and simply walking around carefully until we got to it.

I visualized Maia skidding off the deck while crossing the Strait.
A mother’s worry always trumps a father’s laziness. 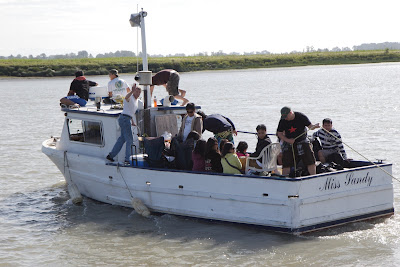 So one week after our planned departure date, we were woken by our neighbour, who was heading off on a little tour with a few guests (got to admit that we’re starting to worry because 24 hours later, he’s not back yet. Shades of Gilligan’s Island and all that…), got up early and started taping off the deck. And taping. And taping. 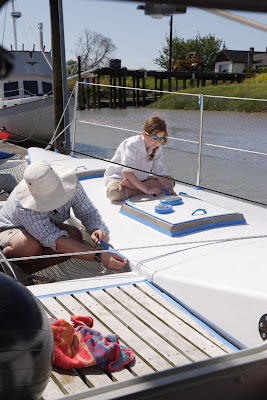 Then we sent Maia to her grandparents (because they don’t make respirators in her size) and we started painting. And painting. 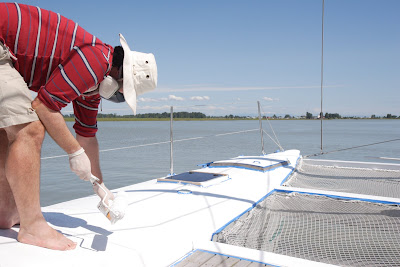 Then we went to the pub – because our kid was at her final night with a babysitter!

The decks are nonskid now, though. We checked this morning.