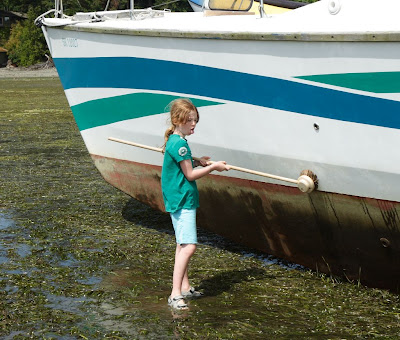 Despite the fan fare of leaving the dock and setting off for adventure, we have something to admit.
We're not finished.
If you ask almost any boat owner, you'll be told boats are never finished. That thing called a "to do list" stretches on forever, sort of like when you're trying to get a seven year old to do something that has the word 'work' in it. In our case it includes things that range from urgent, as in our safety and comfort require that we get to them.
To the wishful, and our wish list is too long to even go into that catagory...
But we know we'll never be done. I'm okay with this.

In fact, I've alway been haunted by a story about Webb Chiles. He wrote about how, after years of toil, he actually finished his to do list, went for a celebratory sail and his boat sank.

Later I learned the sinking was a suicide attempt. But it didn't matter. When I read about the sinking it reassured me that it was okay if we never finish, because if we did - all hell would break loose.
And who knows if having just one frozen head through hull could have kept Webb Chiles and his boat safe through his personal storm.

While I'm okay with the to do list needing attention, I do wish we were more finished before Evan became unemployed and we gave up our warm dry home (which just happened to have a flushing toilet because homes don't have through hulls that can freeze up and require the home to be hoisted out of the water for repair).
But we didn't.
So on day two of our glorious new life, we woke up early and drove the boat up onto the beach. 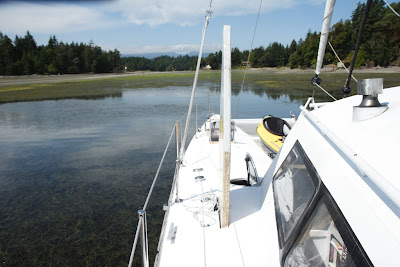 Which, if I were one of those insufferable catamaran owners who goes on, and on about how much faster, safer and more civilized a cat is than, say, a monohull, this would be reason number #34 on the list of why cats rock. But I'm not like that. 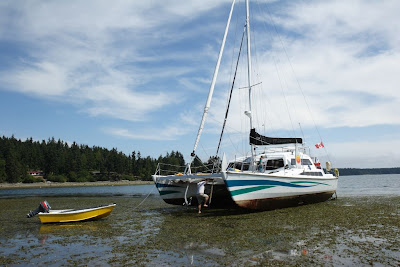 But keep in mind that if we were a monohull, we'd be paying lots of money being hauled out in a boatyard. And given that Ev isn't so loose with the cash - we'd likely be without a flushing toilet for quite a while... 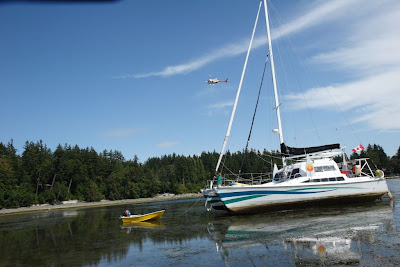 Our big boat on a quiet beach drew a few onlookers - even a helicopter came to check on us...
The eagle ignored us though. At least I think it was a juvenile eagle - anyone know? 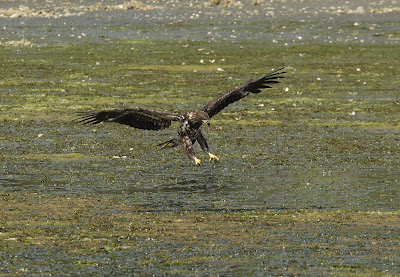 Email ThisBlogThis!Share to TwitterShare to FacebookShare to Pinterest
Labels: aground, build, careening, catamaran

Are those smiley faces I see on your daggerboards? Sweet touch dude! What's the tidal range there?

The smileys came with the boat. Along with giant Snoopys. We made those go away. I want to turn the smileys into pirates.

Pirate smiley - that would just rock! be sure to post some pics if you do it!

Best of luck on your adventure. As a former big cat owner, I note with a bit of dismay a common characteristic of mid-range cruising cats: low wave clearance. Have you much experience in driving the boat through heavy chop? Is there a wave breaker assembly under the wing where I can't see it? Haven't read the entire blog yet, but sounds like fun. Used to build Ingrids in Port Townsend, sometimes attend the Wooden Boat Festival (highly recommended). Once again, good luck! Your comments on homeschooling are directly on point. My 40 yr old and 24 are doing well indeed. I've venture to say it's a net life advantage to be homeschooled at least a few years.

The bridgedeck clearance is about 26" at the lowest point, higher under the cockpit. With relatively low hulls it was a bit of a height/esthetic compromise about how high to put the cabin.

Thankfully the bridgedeck doesn't start until 1/2 way back from the bow at the middle of the boat so when beating into chop the worse we get is a light slap from time to time.