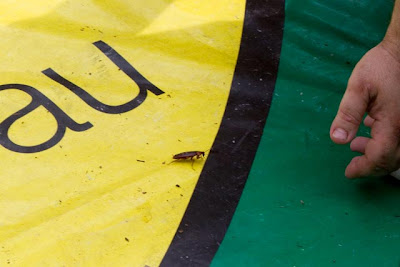 The cockroach that won the race was accused of being on steroids: An accusation that didn’t seem to go against any of the event’s rules. Flying is a no-no (and as anyone who lives on a boat can tell you, these buggers can really get some air) but steroids, apparently, are cool.
After two cockroach races, a go at dunking a random Aussie in the dunk tank, and leaving a few dollars at the bar it was time to head back to Totem and continue with our day’s events. For Australians—it was Australia Day. But for our wandering band of nomads it was Gung Haggis Fat Australia Day—a combination of Australia Day, the Chinese Lunar New Year and Robbie Burns Day (Lord Selkirk entertained Robbie Burns at his mansion back in the day and when Burns was asked to say grace before a meal, he composed the Selkirk Grace, which is recited to this day at Burns suppers. This, for us, has always been reason enough to celebrate. Well that and Scotch.) 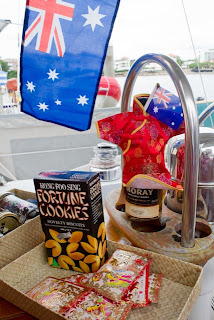 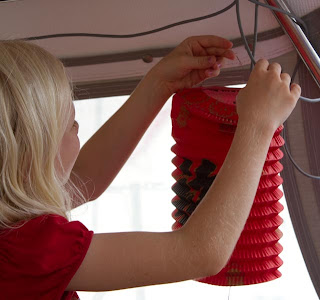 So the kids decorated, and Behan and I cooked, and Jamie and Evan kept our glasses filled. And our makeshift holiday of poetry reading, fortune cookies and steroid-pumped cockroaches began to feel like something meaningful and real. Instead of Haggis we had Kanga Bangers. And rather than a Tipsy Laird for dessert (trifle) we opted for Pavlova. And we made plans to celebrate again next year—yes, next year. Evan has accepted a job and it seems Australia will be home for a while. 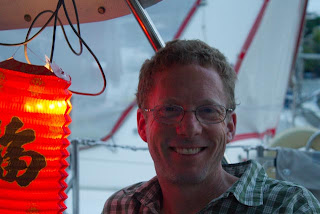 As we dinghied home from Totem--rounding Kangaroo point and then watching the necklace of lights on the Story Bridge give way to the cityscape--I realized this will be the forth country the three of us have lived in.

I’m not sure when you make the transition from visitor to living in a place—especially in a foreign country, where every time you feel like you start to understand it, something weird happens—like cockroach races. But as we made our way up the river toward our boat, the realization that I live here sort of snuck up on me.

I’m coming to see the idea of home as a mosaic—a montage of inspiration, and people you love, and celebrations you adopt that goes beyond place. It’s the life you create when the sum of its parts are greater than the place you are. Home is also everything you bring with you and all you’ve ever been—except cockroaches.

I agree, home is where are family and friends are and cruisers have learned to adjust quickly. Enjoy your new home!

"home as a mosaic"--love it! Congratulations on the job and best wishes.

Cool a job. Bouncing at the cockroach races? Congratulations.

Thanks for the good wishes everyone--we're really excited! Ramsay--how did you guess!!??

DTW Airport Taxi is a team of professional Metro airport taxi service, private hire and Expert drivers who are fully trained in all aspects of passenger service, quality assurance.