Sulking and working, working and sulking

We were up early enough this morning to see the sunrise.
Despite the rosy glow, I sulked. I wished it were rising somewhere else, somewhere further south, somewhere where my breath didn’t linger in the morning air. And I wished we were magically transported there – now.


Even though we’re in a lovely place and the weather is pretty decent (despite the stupidly cold mornings) I’m not so fond of this part of boating life. We’re in the stage called limbo. We still have stuff that needs to be done before we can head south but while we work to get the stuff done our weather window is beginning to slide shut:

Which causes me anxiety and makes me grumpy.

I’m the first to admit that I worry far more than I should. I often wake in the middle of the night concerned about totally random stuff – last night it was chocolate chips (should we buy them now? Or later?)
Evan rarely seems to worry, which annoys me. But he when does show stress, I know things are bad and I get even more worried.
Which leads me back to right now, Ev is beginning to show signs of stress. He’s done the bulk of the physical work that got the boat ready. Yes, I played a supporting role but because one of us needed to hang out with the kid, only Evan got to deal with sharp tools and toxic chemicals (those aren’t good for kids to play with…) So, despite the fact I’ve always been a cocaptain on our boats – this time we went with tradition and divided into pink and blue roles.

And I liked it.
I like not getting dirty. I like not worrying if a screw-up on my part could cause us to sink. I like being oblivious to how this was installed or that was designed. I've become the type of female boater I never respected: the kind that doesn’t really like to drive my dingy (it has a twitchy throttle) and would really prefer not to touch yucky chemical stuff while hanging upsidedown in a cramped locker. 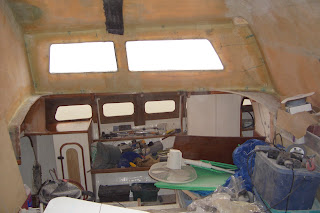 But I’m discovering a problem with this. I haven’t got much idea about how anything works on the boat. I never know which switch to flick or where the technical stuff is kept. I know all about housekeeping, but I’m pretty useless when it comes to getting the boat ready. And here we are, running out of time.
This is the point where I could claim to have an epiphany – I’d realize I’m sabotaging my sailing life by not jumping in and draining the transmission oil out of the engine. But honestly – I think epiphanies are an over-used literary device that writers employ when they want a good ending to a story. I don’t think they really happen. I don’t think it’s likely that I’ll suddenly wake up, all raring to climb the mast or disassemble something greasy.
So, while I’ll probably not suddenly decide it’s my calling to work on the boat rather than cook dinner, I do know where I want to be: south, where the morning air is light and warm. And I know there’s only one way to get there – by actually working on the boat and not sulking.

But I also think I’ll buy the chocolate chips on this shopping trip and make cookies to feed us when we stop working.

Email ThisBlogThis!Share to TwitterShare to FacebookShare to Pinterest
Labels: construction, fear, Life aboard

No sulking allowed or we're taking away your cruising license.
You can do it!

p.s. make sure you bu DARK chocolate chips. You can get those other ones anywhere.