Well, we’re ready. Or ready enough.
We had a lovely good-bye evening with old sailing friends, Karen and Chris (and offspring Ryan and Mya) from Dessert First (who traded in their boat for a house and minivan and are currently enjoying the vegetable part of life), went to bed early and woke up to wind.
Lots of wind and rain.
A gale actually.
The first gale of the season.
So we’re not going anywhere today, because we don’t have to.
We’re kind of fair weather sailors.

Instead, I get to look around at the anchorage and contemplate some of the very special boats that are out there. We like to call them Island Boats. To an uneducated eye some of these craft might appear derelict, while others are simply odd looking. But if you know a bit about the history of boat building on Vancouver Island (think wild west frontier meets Gilligan's Island) you’d know these are special craft that combine island quirkiness and ingenuity, with the inspiration of a couple of visionaries. 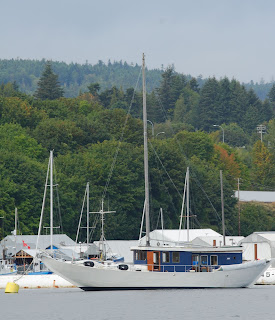 Island Boats (by our definition) tend to be junk rigged (or maybe schooner rigged, or maybe ‘what the heck kind of sail is that, anyway?’ rigged) vessels that were owner designed and built (usually in a backyard, on the beach or on a deserted piece of crown land) and made out of materials that were either found (think telephone poles for masts), scavenged (furniture from the side of the road), borrowed (that friend won’t miss his decorative port lights) or acquired at deep discount (someone ordered this then never came for it, not sure what it is...).

While by our own definition we almost count as an Island Boat, there tends to be a few other distinctions; Island Boat owners rarely have any nautical know how and what they do have comes from a well-thumbed copy (probably borrowed) of “Sailing Alone Around the World” as well as those visionaries I mentioned. 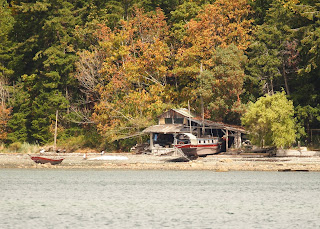 The junk rigging part (as well as the idea that anyone can build their own boat using a few simple handtools such as an axe, saw, plane, and chisel.) comes from Allen and Sharie Farrell, who built 40 wooden boats up and down the BC coast. The two are folk heros in the region and inspired generations of island kids to become Island Boat builders. And thanks to their lovely boat, China Cloud, there are probably more Chinese style junk rigged boats in BC than anywhere else - except China.

The other inspiration was John Samson. He built the first ferro-cement boat in North America then sold plans to dreamers all over the world (although most of them seemed to be on Vancouver Island…) His book, The New Way Of Life, suggested anyone could (and should) throw off the shackles of working life, build a boat and sail off to the South Pacific. Then as a boat broker, he encouraged hundreds of green, blue-water dreamers that even if they didn’t want to build there own boat they could still buy an affordable one (probably built by some other dreamer who ran out of cash…) and head out. 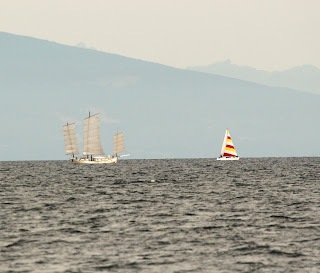 So that’s the reason that if you pull into any Island anchorage and play “what type of boat is that?” there’s often no right answer. Sure we have the glossy production boats, but alongside those staid white hulls will be boats of uncertain pedigree, built from welded steel, ferro-cement or wood timber. Their lines will have odd proportions and the rigs will confound you. Some will be covered in junk and barely afloat, while others will be lovingly cared for. A few of these boats have made it out of their home port: having crossed oceans and made names for themselves. But the majority were never finished. They still sit in backyards or on vacant land, their telephone pole masts toppled and their hulls crumbling.
When we see one afloat though – it’s hard not to smile. Their clunky hulls and mismatched sails are a testament to a sweeter, more innocent time when people thought all you needed to cross an ocean was the will to go and a boat made from a bit of timber glued together with some random substance.

I've just discovered your blog and I am greatly enjoying it. This post really hit home as I just spent a week wondering around marinas in Victoria, Salt Spring Island and Vancouver and the boats that stuck out to me we're the ones with personality. The newer production boats just didn't do it for me. I will start my cruising adventure in Victoria several years from now when the kids are settled in their own lives, but for now, the dreams are fuelled by blogs and appreciating the art of the boat constructed and maintained by others.