So we’ve found the smoking gun that caused the wobbly rig.
This bit might be better written by Evan, because despite the fact I’ve written a number of technical articles, I’m not particularly technically minded.
I just fake it.

Anyway, the recap is: while sailing toward California the wind came up on our nose and so we tested out our ability to heave-to while we decided what we wanted to do (we both have the goal of avoiding as much bad weather as possible while Maia gets her sea legs.) While hove-to we noticed that the mast was bending over, the wrong way. Not that there is a right way for a mast to bend…

It was 4am on a windy, moonless and overcast night, aka dark and stormy. Ev got the sails down pronto, which was a bit of a tough thing because we were trying to keep the wind on what appeared to be the strong side of the mast and the sails slightly filled while he was hauling them down.

Then Ev checked all the shrouds to see which of them had gone.

None of them had broken, which rather confused us. But then again it was the middle of the night, on the 3rd night of our first offshore passage, that’s a generally confusing time…

So Evan secured the mast as best he could and we began to motor back the way we came, to the closest safe harbour, which was Coos Bay. 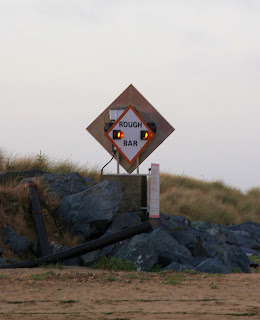 When the sun came up and Ev rechecked the rig, we were still confounded. We had one very slack inner shroud and a general looseness in the rest of the rig but no obvious failures. If we didn’t know better we would have guessed that some sort of shrinking spell had been cast on the mast during the night.

Once we were in harbour the first working theory was that the spectra lashings on our stays had undergone some construction stretch, or creep. But even after Ev had retuned our entire rig, the loose shroud stayed loose. So we looked at it more closely and saw this: 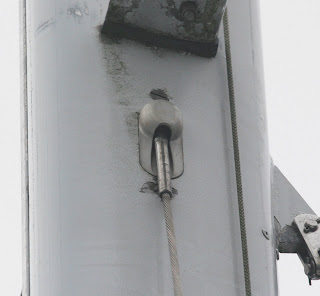 Which if you look closely at the faint line about 1/2 a cm under the swage you'll see it looks different than the other side which looks like this: 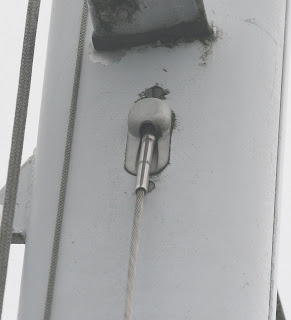 Our best guess is the wire has pulled through the swaged fitting about 4-5 cm (the swage doesn't seem to be crimped on it's whole length. 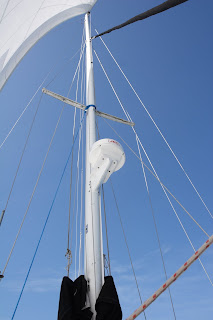 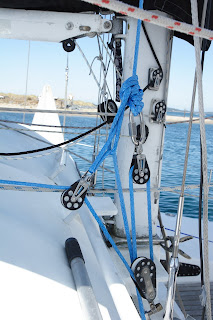