We were up early again today.
There was no sunrise this time, just sort of a gradual brightening of the grey drizzle. Even though the weather is still acting a lot more like October than we’d like, it’s time to move on. We need to get a bit closer to Neah Bay so that when (if?!) we do get a break in the lows that are marching across the Pacific, we can make a run south. 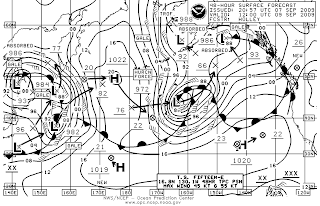 So we were up at our version of the crack of dawn: 8ish.

We’re not good at getting an early start. I’m not sure why. We’re both more than capable of waking up early to get to say, the airport. But when it comes to getting the boat underway before 10am, we can’t do it.

On little Ceilydh we often had passages that would take us about 15 hours. So our thought was that if we could get underway just before the sun rose, we’d be anchored and sipping sundowners when the sun set. Inevitably though we’d sleep through the dawn, wake to bright sun and end up dropping our hook by spotlight. 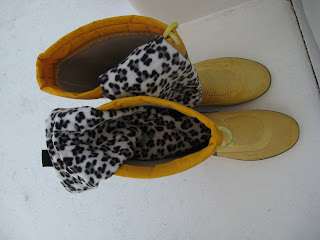 But today we were up early. And unlike most days, when we watch an anchorage empty out while we’re still in our pyjamas, today we were one of the first boats to get moving. Our first stop was the fuel dock. After two solid days of gales we knew that it wouldn’t take long before the dock had a huge queue. So while the other boats slumbered, we ate our oatmeal and then dressed in our cozy foulies so we could pull up our anchor and get there first.

Then it all went to hell.

For whatever &?&!!*#! reason the !*#$!! crab fishermen lay their traps right through the anchorage. We know this. We watched in shock as one went blasting through the crowded harbour tossing out his line of traps all willy nilly. I think we planned to make a mental note to be aware of this when we pulled up anchor. But it was early and we were sleepy. And we caught one of the lines – but failed to notice it until it was well and truly wrapped around the propeller.

Evan was able to slice the line but when he started untangling it, we discovered that somehow one end of the line had worked its way deep into the cutlass bearing – which for you non-nautical types, is a bad thing. So we re-anchored the boat using the outboard. Then I took a good long swig of my cold coffee (pretending it was something stonger) and we both wondered just how many days and how much money a stupid peice of rope would set us back… 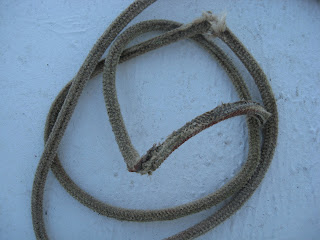 As a last ditch effort before looking for a shipyard that could haul us, we led the crab trap line to a winch and then gave it an almighty tug - pulling it free. Then we tried running the engine and to our shock and delight there seems to be no ill-effect. So we pulled the anchor back up (checking carefully for crab trap lines), joined the now long line for the gas dock and filled up our tanks when our turn came.

Then we headed out of the anchorage – just as my watch said 10am.

So is the cutlass bearing buggered up or not? Glad to hear you were able to get underway. On our first morning "out" away from Back Creek we also caught a crab pot -- AND losy steering and buggered up the windlass. *sigh*
As Captain Ron would say, "If anything's gonna happen, it's gonnna happen out there."
Crab pots should all be neon pink with flags and bells. Period.

It seems to be OK. Except it sort of got shoved forward within the shaft strut about 1/2". (1/2" of the bearing is poking out forward).

I watch the crabbers throw out their traps everywhere in our bay. I have even watched them throw their lines of traps out right in the marina.
I have so far not picked one up, and I hope I don't. When the tide is running, you often can't see the floats at all as they are pulled under the surface by a few inches to a foot. You can't see them until you are right on them. Very frustrating.
Glad to hear that the cutlass bearing is not messed up badly.