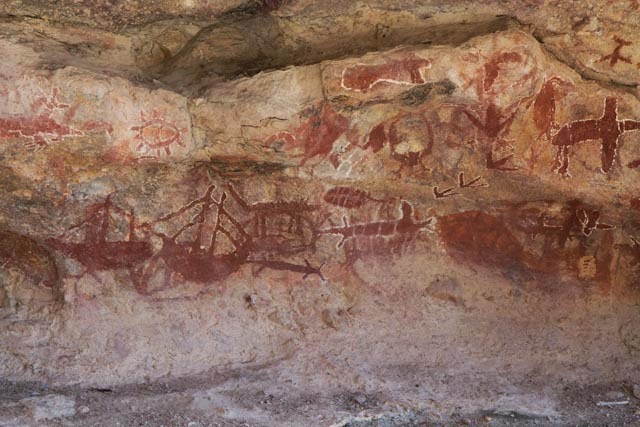 It began like so many of our adventures do; a casual mention over drinks and a few half-recalled details. “It’s cave art—there are supposed to be 19th century sailing ships, dugongs and turtles.”

When I persisted, we managed to narrow down the island; Stanley Island in the Flinders group and get a few directions, “go in through the mangroves until you find the trail.” Even the government website was a bit light on details, “This walk on Stanley Island begins at the Mangrove Landing in Owen Channel. The track crosses to the northern side of the island, continues along the beach and meanders through low woodland.”

Owen Channel, it turns out, is over two miles long. Fully half of Stanley Island has mangroves along this length. We anchored at one end and made our way down the channel by dinghy, bashing through big seas in high winds, completely soaking ourselves through, while playing eenie meenie with the mangrove landings (ahem, small croc-infested beaches…)

Being a pessimist I suggested we start with the furthest beach, which after we crossed the fringing reef, turned out to be a long dinghy drag through shallow water (We’re in an area that tells us to bring up our dinghy at night because crocs are known to bite them.) Then we anchored the dingy and went exploring behind the mangroves and looked up a hill for signs of a trail. This is where we found the park signs telling us we had found Yindayin. (Not to complain—but if I were putting up a sign for a water access only park, I’d probably put it where you could see it from the water…)

From the sign we set off through a kapok orchard, if you’ve ever seen those old kapok lifejackets these are the orange-sized fruit where the fluff comes from; past meter-high termite mounds; and skirting the Castle Peak cliffs. We wound our way through huge middens with silver-faded shells; and past discoloured signs that told us about the island’s bush tucker, eaten green and fresh this was tasty, this cured tooth pain, this bore fruit. 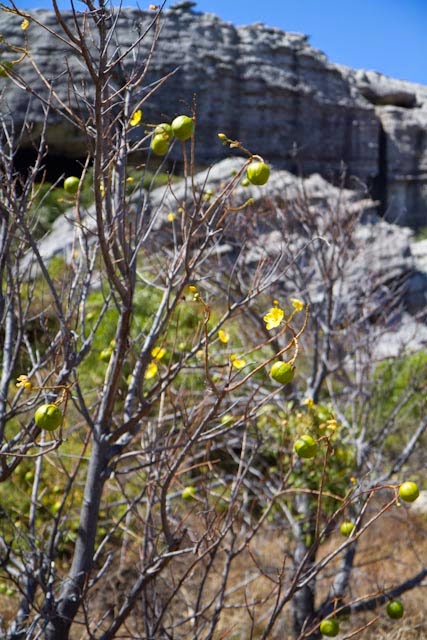 When we reached the beach on the other side Maia warned me that this better not be like the cave art we trudged up a desert cliff to see in the Sea of Cortez—there, the reward for our heat-stroke inducing hike were red handprints of a rather nebulous pedigree found in a cave full of bat guano. 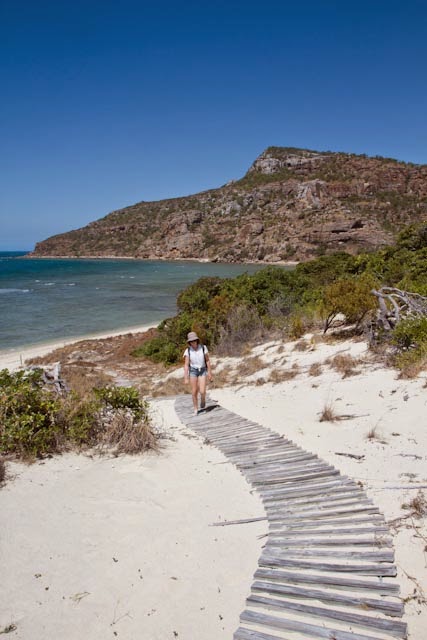 After admiring a few shells we found the trail up from the beach and reached another aged sign, this one explaining that an elder from the Yiithuwarra people, and the last baby to be born on the site, had helped interpret the site. He also drew the last image to be created; a dugong, some 60+ years ago. 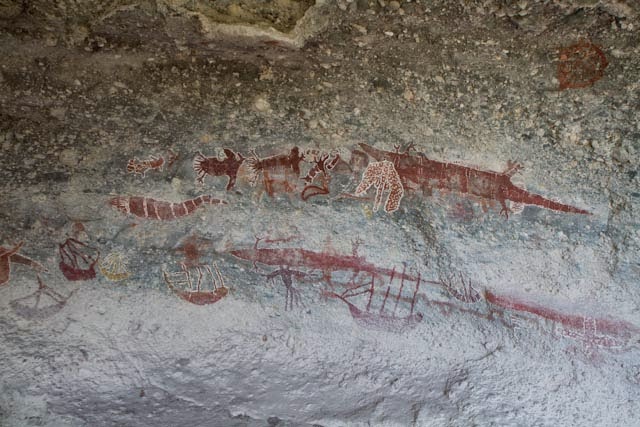 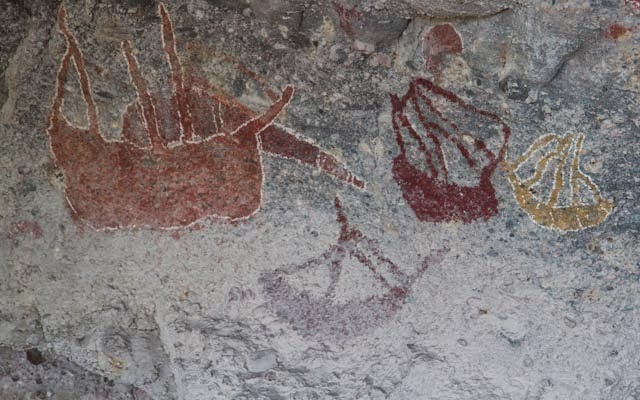 Following an overhanging cliff we reached ‘ships shelter’. Awe is a word that should be used sparingly. But as I took in the cliff face that curved around and over me—forming a wide cave with natural air conditioning—I was awe-stuck. Sailing ships: painted in red and outlined white overlapped each other and obscured other images. Some ships had the distinct sterns of 18th century European galleons; while others had the more exotic eastern curves of Macassan praus; still others brought to mind early 16th century Portuguese ships. Layered with the ships were other signs of daily life; an eagle ray, crocodiles, dugongs, turtles and symbols that were too surreal to discern.
Then we signed the guest book--discovering we were about the 40th group of people to visit this year. 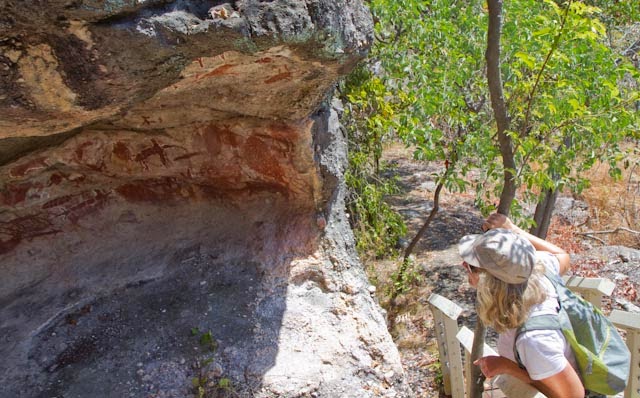 Following the cliff side further into the center of the island the cave deepened into what had been a living place for over 2900 years, right up until WW2. The people who had lived here experienced the tragedies we now know about; some of the men were inevitably lost in the beche-de-mer, pearl and trochus shell industries, the children were sent to missions, illness took a tremendous toll.

But before all of that, while the island still had everything the people needed to survive, someone captured the moment of contact and recorded strange ships as they sailed by.

Wonderful adventure! Great posting. I would like to welcome you to our Sailing Community - Clubtray Sailing.

Unknown said...
This comment has been removed by the author.
3:33 AM


Aboriginal Art is something that enhances your emotions and creative thoughts. I really love to do paintings especially to paint and create images out of my imaginations.

Hello Ceilydh, So exciting to find you have arrived in Indonesia. It was wonderful meeting your family at Lizard and Flinders Islands. We think of you all often as the boys enjoy the beautiful books that you gave us. Look forward to following your continuing adventures, from the crew of SV Arjuna. PS Love the article about raising a child "dangerously".

I feel Aboriginal Art on the old buildings and floors is very common, I have seen so many places having such kind of art. Well I am a fan of Aboriginal Artists, I wonder from where they got ideas about this strange work.