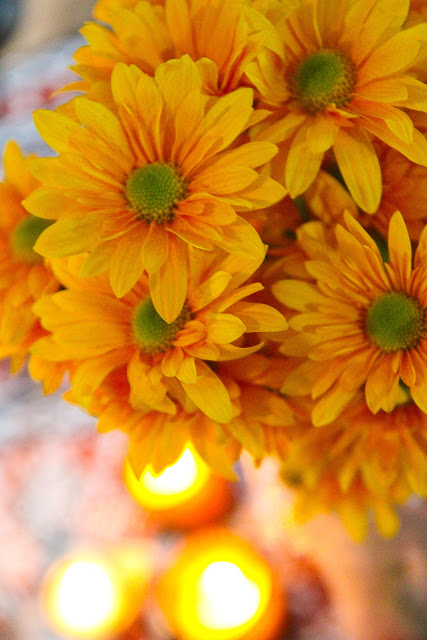 Walking to the bus to meet Maia I was going through solstice plans in my head: Orange food, candles, sunny music… And I was thinking back to a time when the winter solstice marked the point where even if I worked a few minutes overtime I would still have some chance of seeing daylight during the days to come (yes, when you come from a place where winter daylight hours number about eight—this is an issue…)

Though this is technically our second winter in the southern hemisphere—it’s the first wintery winter we’ve had in more than three years.  Though I have to admit a winter where tomatoes can still grow in the garden is hard to classify as real winter. But there are only 10 hours and 24 minutes of daylight here these days.
I was thinking a mash-up of these thoughts when I stopped at a crosswalk and started eavesdropping on the two guys ahead of me:

“This cold snap is killing me,” said the first.
“Yeah, last night I forgot to close my bedroom window and when I got up this morning I could see my breath,” said the second. “I had to go back to bed. It was too cold. I was 45 minutes late for work.”

To be honest—I followed the guys further than I should have just to hear the conversation—I figured I’d just hunt Maia down if I missed her at her stop. I was just a bit mesmerized by someone being so shocked at the sight of seeing their breath. I had to wonder what he would think if he found his underwear frozen to the side of a drawer… That’s when you know it’s cold.

“Did your boss mind?” asked guy number one.

Would you mind if your employee couldn’t make it to work because he saw his breath and had to climb back into bed? I think I’d mind. But I’ve actually put on icy underwear that I had to pry out of a drawer—so what do I know?
His boss didn’t mind. In fact he suggested later hours until the coldsnap eases—so the guy doesn’t have to get out of bed before 7am—which is when the sun rises and warms everything. 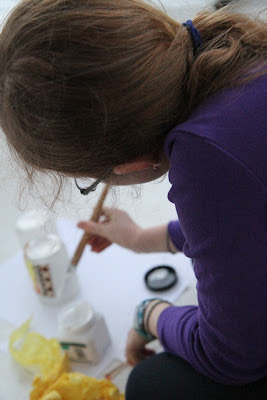 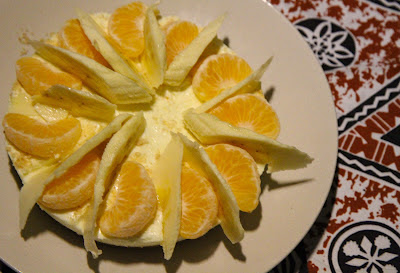 I collected Maia. She made a lantern and we cooked our dinner of ginger carrot soup, winter squash, sweet potatoes and cheese cake with a sun of mandarin oranges. And we talked about our solstice memories: of bundling up for lantern walks and Morrismen, of warming ourselves at bonfires and watching in awe as fantastical creatures called for the sun. And we talked about those harsh winters that settlers to Canada endured—the ones some never made it through. Solstice so often marked the beginning of the starving time. But the midwinter celebrations: the potlatches, and yules, and festivals of light saw most people through the long dark. 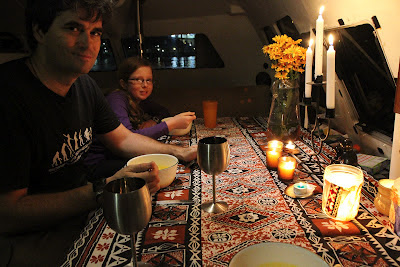 It’s nice to have seasons again. Even if this season wouldn’t really count as season in our homeland. But Maia did find a fallen red maple leaf the other day. And we saw our breath this morning. And in the days to come the sun will shine longer and stronger. And we’ll shift from winter to spring.

Email ThisBlogThis!Share to TwitterShare to FacebookShare to Pinterest
Labels: celebration, Life aboard

Love it!! I'm going to try that next winter. Too cold to go to work...

Awesome. What would he do if the toilet bowl was iced over? OH, THE HORROR!

I was thinkin gthe too cold to work idea was good too--though I don't think my editors would buy it.
Oh, Behan--I had forgotten (or blocked) frozen toilet water... I'm cold just thinking about it.

Welcome to Brisbane, this is why we live where we live,most of us think it's crazy to live where you have to deal with snow and ice.
The "breath" man sounds like a real wuss even by our standards of cold tolerance.. ha ha.
This really is a wonderful part of the world, hope you are all enjoying it.

A wonderful season and a wonderful celebration. Enjoy your longer days...

Thanks, Margaret we really are enjoying ourselves:) Thanks, Carla!