Nothing is Easy on a Boat

Maia and I were laden with groceries and started to load the dinghy as quick as we could before more rain hit. Just down the dock a neighbour was scooping water from his dinghy with a coffee cup—I offered our bailer but he said he was fine and would just lift the dinghy and tip out the water. Before I could suggest he was making a mistake he tipped up his dinghy into the current, ferry wake hit, the 3+ knot current swept into his boat, filling it, sinking it and washing it under the dock.

“Why is this never easy?” he asked me as we both pondered his predicament.

Have you seen those memes going around? The ones that describe different peoples’ perception of a lifestyle? Well the one for cruising might look a bit like this: 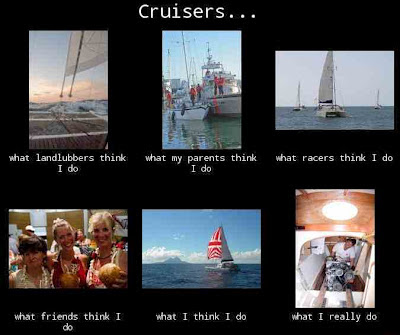 Sure—there are a lot of pretty moments; but to get anywhere, to do just about anything, it’s just not easy.

It started to pour (soaking his freshly cleaned laundry) as we tried to get my neighbour's dinghy free from the underside of the dock (pulling didn’t work, pushing didn’t work, setting it free didn’t work). We talked about the living aboard learning curve and about all the little things you never think of when you’re dreaming about being one of those boats at anchor in an exotic location.

My neighbour explained he was transitioning to living aboard (and now his sole means of transport was trapped under the dock…) How do you stay ahead of the mildew he asked? Ah, the mildew—I think we can watch it grow right now. Seriously—in a matter of hours it blooms. We’ve been told again and again we’re having an unusually wet winter (and it is only four days into the season) but constant humidity and relative warmth is a recipe for growth--all you can do is keep wiping down and hope for sun.

Then he explained this ‘weird’ thing that happens every time he starts a simple project (like bailing a dinghy), “I get into it and realize ten more things are involved. Rather than taking an afternoon—three days later you realize the whole boat’s disassembled.” So I explained ‘project creep’ (this is how fixing a leak can lead to rewiring a light by way of replumbing a sink drain...) and the correct way to predict how long something will take (double the time and take it up to the next unit—so a three hour project will take six days, a two day project four weeks and so on.)

It rained harder and we decided his dinghy wasn’t going to come free until slack water. So Maia and I made our (wet) way home and he headed off for coffee—thinking when he got the dinghy free he might need a new cup for bailing.

We saw him later—rowing home. He commented his lifejacket was gone and he couldn’t swim, so if I saw the dinghy float by without him would I go have a look? Then he surprised me. “That was a great afternoon,” he said. “You convinced me that living aboard is definitely the way to go. Thanks.”

Email ThisBlogThis!Share to TwitterShare to FacebookShare to Pinterest
Labels: cruising, Life aboard

Great site! I'm trying to find an email address to contact you on to ask if you would please consider adding a link to my website. I'd really appreciate if you could email me back.

Thanks and have a great day!

You probably hear this all the time--but I love the stories you tell. I've been thinking about this one all day and came back to read it again.

By the time we finally get our boat out cruising we'll be under NO illusions as to what the cruising life entails. After living on it for 2 years while getting it ready to go, we pretty much get the work/inconvenience/work (did I say work?) routine and we still want to go more than ever. Are we sick? Or just gluttons for punishment :)

The works is worth it, isn't it:) I think my neighbour just needed to know he wasn't alone--and wasn't the only crazy person doing it.

I just love this line of yours - "there are a lot of pretty moments; but to get anywhere, to do just about anything, it’s just not easy." Life is never easy but all the trials and hardships all make us into a better person. It is never easy but very rewarding.

Thanks Albert, it's true-nothing worthwhile is easy. I think that fact sometimes catches people offguard with this idealized lifestyle though. You expect storms to be hard, and breakdowns to be hard. But the day to day conveniences that we've made so easy for ourselves on land sneak on you up when they turn difficult again in boat life.

I love your Cruisers version of that classic poster Diane, very funny.

Oh geeze. This is SO true, and the guy is right, it helps to know we're not alone! Your method of predicting how long a project will take is CLASSIC - I will definitely use this to help our landlubber friends understand what it means to be "living the dream"!