Life Aboard in Brisbane 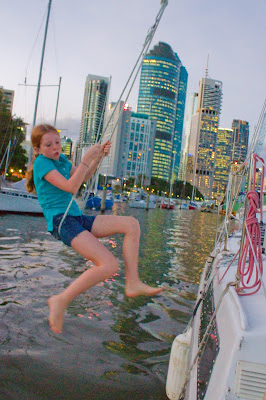 A few times in the past few weeks I’ve been asked roughly the same question, “Where exactly are you? I mean I know you’re in Brisbane but how does that work? Where do you LIVE?”

If were to tell someone we lived in bungalow in one of Vancouver’s urban neighbourhoods most people would get a picture in their head—trees in the yard, garden in the back, contrasting trim, short walk to the grocery store, park down the street… But when I tell folks we’re on the pile moorings, beside the botanical garden, and the city centre they get nothing—no image. I don’t even get as far as saying the grocery store is four blocks away. They’re still back at, “Pile moorings? Is that a marina? Are you still on the boat?”
Still on the boat?

This question threw me the first time I was asked. But then I realized most people think of boats as recreation vehicles—and as far as they’re concerned we’re living in a trailer, albeit a double wide. And technically if you’re not actively camping, you should move out of the trailer and into your real house. But the question also helped me explain where we’re currently tied up. ‘Think of the moorings as a trailer park,’ I said.  ‘For boats.’


Most people are familiar with marinas—they’ve walked docks and peaked in through the windows of the boats. Mooring fields and anchorages are also pretty common and easy to visualize. But pile moorings like we’re in—where boats are suspended bow and stern between posts—are a bit unfamiliar.

The logistics work like this: we are tied to one piling behind us and one in front and we take our dinghy a short distance back and forth to a dock—where in the basement of a posh hotel we have a laundry room and showers. We also have garbage and recycling bins, and place to keep our bikes, and that grocery store I mentioned (as well as the big downtown with malls, museums and libraries a short walk away).


In some ways life in the moorings is not as convenient as a marina; we need to catch rain water or carry it to the boat in jugs from the laundry room faucet, we only have the power we generate from our solar panels and we need to take a dinghy to shore. But for us these minor inconveniences are more than made up for by the fact that it’s cheap (we pay $280 a month) and that we’re in a really cool location: Southbank--the site of expo 88' is across the river from us and about a 20 minute walk away, we have several farmer's markets to choose from each week and we have a huge park as our yard.
We also have an interesting and ever shifting cast of neighbours who range from your standard trailer park residents in semi-derelict boats, to professionals living aboard before setting off cruising, retirees, world cruisers who have recently returned, and transients cruisers who stop for a while to enjoy living on the edge of a city.


View Larger Map
The pile moorings are found at the foot of Edward Street. Dockside Marina, where friends are located, is visible around the bend of the river.

It's been 17 years since my stay on those moorings yet it sounds about the same. Does that constant river ferry catamaran still create those low level wakes that rock the boat?

I seem to recall those moorings being quite popular, so much so that I had to anchor up river a few hundred yards ... further into the gardens. Are the moorings still full most times?

Nice as Brisbane was, I still preferred the Whitsundays or even just the islands and waterways to the south (between Moreton Bay and Southport).

We do get wake that rocks the boat. It only really bothers us with certain wind and tide combinations--then it can be a bit rocky.
The morrings are full all summer (cyclone season) we needed to wait for a spot. But they emptied out about six weeks ago as everyone headed off. I expect they'll start to fill back in during October. We look forward to getting out and seeing more as our time here goes on--but feel really fortunate to have such an easy place to hang out for now.

Oh, looks nice. Love the photos. Any thoughts on other Oz cities to spend time in over the summer? I like the idea of not being in a marina.

Hey anon #2, it depends on what you are looking for I guess. Mooloolaba has a free anchorage--but it has a time limit for liveaboards to use it. It also has pile moorings--though I'm not sure how those ones are set up. You do have the beach there, which would be awesome...

Hi Diane, great blog about your time in Brisbane. We are on a 34ft sailboat and are on our way to Brisbane. Do you know whom to contact to get a mooring in the Brisbane river? Is there a harbormaster/ office?
Thanks, Chris and Alena