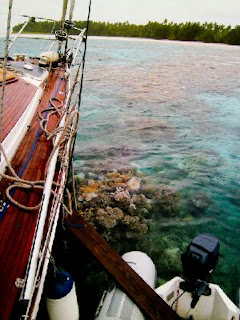 We were in Chagos in 1990, when an out-of-season, and unpredicted, storm with cyclone-force winds swept through the area. Fortunately, we were on our own anchors, and only drug a bit until our Bruce anchor embedded itself into a coral bommie. I know that this is frowned upon now, with cruisers being more aware of the damage this does to coral, but back then we were thankful to have that keep us from dragging.

The cruising family is indeed a tight-knit community. I look forward to hearing more about this story. I have no doubt that by putting your collective heads together, you'll come up with something to get this stricken boat to a port where they can make repairs.