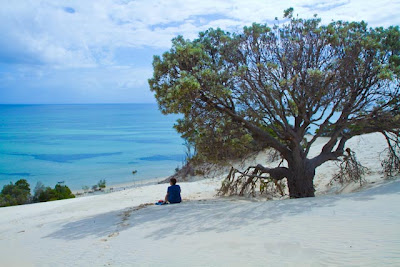 For reasons I can’t quite fathom, setting off sailing on a fun sailing trip can seem a lot like work. Part of the problem is to actually get out on Moreton Bay means timing the currents, setting off at high slack, then making a nearly two hour journey to the sea. The return trip needs to be timed almost as precisely.
And then there’s all that packing, planning and organizing. Moving your house is hard.

What this means is it’s been a year since we’ve been anywhere. A year. We’ve planned to get out a few other times but always some thing has foiled the plan; a cyclone, or a broken engine, or waiting for some vital part. But this past weekend all the fates came together—the weather looked fine, the tides were cooperative and most importantly all the boat’s systems are functioning.

Despite the fact we live aboard, have crossed an ocean, and got very good at provisioning in stores that had very little by way of provisions, getting ready to head out felt like we were flexing a forgotten muscle. It was like when we went camping two weeks ago and I thought I bought everything we needed but still managed to forget the eggs for breakfast and the butter to fry in. Except luckily this time I was able to just go back to the grocery store and hardware store every time I realized I missed something from the list (got sandwich stuff, but forgot the bread). And I still forgot to visit the liquor store… 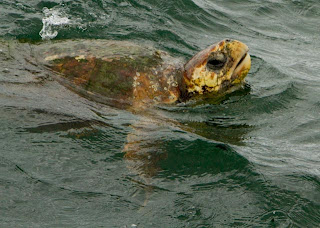 Casting off was drama free. Except for the huge amounts of black smoke coming from the engine and the fact that no amount of throttle seemed to give us any forward momentum. Fortunately we have a second engine—a new outboard we use to manoeuvre and dock. With the current in our favour it can push us at 4 knots. Unfortunately we only carry enough gas for manoeuvring and docking.

So we dropped the anchor (after it was clear that running the engine wasn’t going to magically make the smoking stop) and Evan dove into the murky water and discovered that rather than having a loving three bladed feathering prop, we had a ball of barnacles. It’s been a year, remember?

Eventually we made it out on the bay. Maia dove in for a swim and we came up with a definitive answer on whether or not our bottom paint is still working (no—the boat’s bottom was supporting a barnacle farm). But the sailing was great. The weather was lovely (other than one squall). We saw sea turtles and pelicans, climbed dunes and swam in warm water. Ate dinners with friends and watched the moon rise and wondered why we didn’t get out more often.
It was so lovely we think we should do it more often—or maybe even for longer.

Email ThisBlogThis!Share to TwitterShare to FacebookShare to Pinterest
Labels: Life aboard, sailing, wildlife