If you’re not a boater, a rusty anchor chain probably isn’t that exciting a thing to contemplate. But when those rusty links are the link between your boat and your anchor (a piece of equipment that is easily one of the most important items on a boat, or under a boat) the rust gets personal.

Chain is expensive stuff—and in recent years, because of increased costs, the protective zinc coating found on chain has become thinner. This means that unless you are diligent about washing down your chain, end for end it as it shows wear, and touch it up with a wire brush and zinc paint when the first spots of rust do show up, before you know it you’ll have a rusty ball of chain in your anchor locker.
Or at least we did. Our chain is about 5 years old. Not that old in the boating world—but a few years of constant use, followed by a year in the anchor locker meant that our chain was rapidly approaching the cut-off point between salvageable and garbage. Although surface rust, even if it’s a bit flakey, isn’t the end of the world for chain-but you do need to remove heavy rust to have chain regalvanized.

As a guideline you should toss rusty chain if:
- Wear exceeds 10% of a link diameter (check where the links connect).
- The chain is cut, nicked, cracked, gouged, or pitted.
- It’s distorted, twisted, bent or stretched.
- You don’t know its history, including how many times it’s been regalvanized.

If you got around to regalvanizing before we did and the surface rust was fairly light (indicating you still have some zinc coating left) you can probably send it straight for regalvanizing without prep. If you have more rust then you’ll need to look at sandblasting, which is normally hugely expensive, unless you try a version of poor mans sand blasting.
We headed off out of Brisbane in search of a sandy road. When we found one we tied the chain the trailer hitch and set off down the empty road (the one car that passed us was pretty confused, or thought we were confused). By end-for-ending the chain a couple of times and driving through sweeping S turns the chain started to show bright metal after about 10k. Then it was off for galvanizing.

Because I ask about this stuff I learned the first step of the galvanizing process is a caustic soda solution to remove grease and oils from the steel. The chain is then immersed into a pickling solution of sulfuric acid. Then it’s ready for the molten zinc. 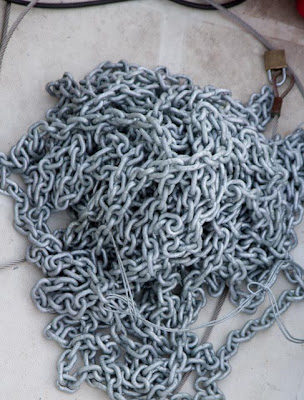 The result is a thicker coating of zinc than what the chain had when it was manufactured—which means it should last longer. Especially because we’ll take better care of it this time round and not wait so long before regalvanizing it again.

Our cost at Industrial Galvanizers in Brisbane was $2.05 a kilo—and our chain came in at $166. Far less than new chain would have cost (we can’t get our chain here so would have needed a new gypsy as well).

Nice post! Our new chain cost us a fortune! So anything I can do to protect it, is worth it!

Hey Tasha, Chain care is going to be part of our new routine too. We're hunting down zinc paint and plan to keep a much better eye on it this time.