Where We Are Now—San Carlos/ Guaymas 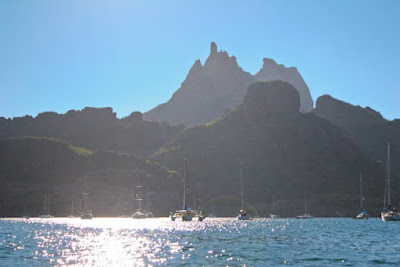 The landscape changed when we reached Isla Tiburon—the desert became lush and green, completely different then the harsh environment we’ve grown used to. When we reached the mainland it just got greener—a sign of both a wet rainy season and the change we’d made in climatic zones. Pulling into San Carlos, with its soaring Tetakawi Hill covered in palm trees and flowering greenery, I felt like we’d come much further than 170 miles or so from the other side.
This isn’t our first visit to —we were here 14 years ago as well. Back then the town was barely under construction and there was no resort and pool (which we may, or may not, be crashing on a daily basis), no restaurants with waitresses who call you ‘hon’ and offer endless ice tea refills and no strip of shops and services lining the road into Guaymas.
was built on an old cattle ranch known as the Baviso de Navarro. In the 1950s Rafael T. Caballero had a vision of developing a tourist resort and over the next 60-years his idea slowly came to fruition. Located on the edge of Guaymas, caters to Americans and Canadians in the winter—but this time of year the majority of the town’s tourists are Mexican.
Down the road from San Carlos Nuevo Guaymas is the city of Guaymas—named for the Guaymas tribes who dominated the area pre-contact. The European version of the town was founded with a mission in 1610. The Seri people weren’t keen on having Spaniards as neighbours though and fought them off until 1769. After that Guaymas gradually became the industrial town and shrimp-fishing port it is today. 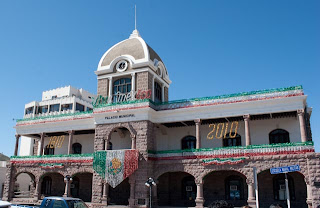 As far as a place to be on a boat— is an easy one. There is a French word: dépaysement, that I was taught when I was last in . I was told it doesn’t easily translate to English but it refers to that sense of disorientation you feel when you’re not in your own country, that sense of not quite being part of a place. Mostly when we travel we seek that feeling—the goal is to put ourselves a little off balance. But there are some places where the feeling goes away—and the effort of travel recedes. In with its green hills and cool breezes; easy shopping and plentiful stores; and its friendly easy going people--there are no challenges. There is no dépaysement.
For a little while we’re in a place where the green hills trick us into thinking we’re close to home, the routines seem familiar and the town’s easy-going acceptance feels just right. 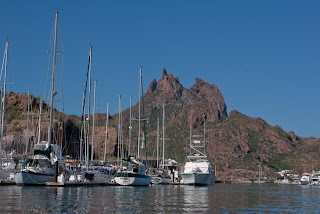