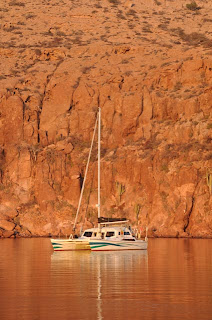 We woke feeling it was like a holiday. I finished my last emails, and then we pulled up the anchor and left the Internet and our final connection to land-life behind for a couple of weeks. I felt a bit jittery at the thought of no Interweb. It's funny-how something that was barely invented the last time we went cruising has grown into such a tether.
But un-tethered we sailed, until we reached a little anchorage near Isla Islotes.
Islotes is a Sea Lion breeding rookery where some of the Sea's 30,000 California Sea Lions breed and give birth. Birthing season starts in May and ends in July-so right now the isla's rocks are covered in new pups. They are also filled with protective males, who snort, and burp, and bark, and chase away any threat to their families. Because of this aggression, June isn't the optimum month for a visit to the rookery. But we were told if we were respectful and let the Sea Lions come to us, it would be safe to swim with them. Yup, swim with them… 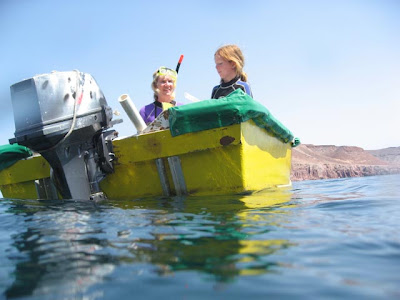 If you've ever seen a Sea Lion up close, you'll know they are big. And when you're in the water with them and one wants to look you in the eye, they appear even bigger.
Our behaviour seemed to mirror the Sea Lions when we jumped in the water. Our big male (Evan) got in first a made sure things were safe, then me (the mama) got in with her pup. My pup was a bit nervous as we got our bearings and she held my hand tightly. But Islotes is a park-and the life is big and varied, and pretty soon Maia was fascinated by all the fish that were new to her and was free diving down to have a closer look.
Then the first Sea Lion came to see us. It was a playful juvenile and Maia grabbed my hand tightly and squealed as the little Sea Lion swam up to us and did a backward flip away and then reappeared from behind us. Maia continued to cling as more and more Sea Lions came to see us-at first it was just the curious juveniles, sleek and agile they swam circles around and below us--making us giggle at their antics. Then a mama brought her pup to see us. It clung closely to her on their first few circuits-riding on her back but eyeing us closely as she circled around us. 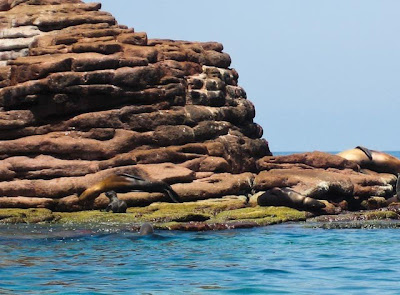 My pup held on tightly too-her eyes big as saucers, her breath coming in excited gasps while she watched the pup watching her. Then I watched as the mama pulled away from her pup and let him come see us on his own-I was a bit awed by her bravery, even though it felt familiar.
"I want to dive down, on my own, like the pup," Maia told me as she let go of my hand. And I watched her dive-sleek and curious-without me.
*we have neat videos of both Maia freediving and the mama and pup circling that we'll add to this post when we next have Internet.
----------
radio email processed by SailMail
for information see: http://www.sailmail.com