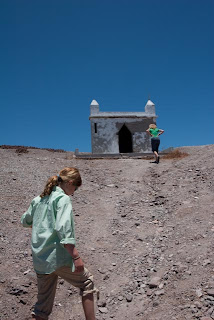 Of all the desolate places to live in the Sea of Cortez: Isla Pardito--which rises to about 40', is less than an acre in space, has no vegetation, and is one of the Sea's few inhabited islands—most begs the question why. We were told about fifteen people share the island—which has no water, no power and is quite terrible to be on during a storm.
When we anchored off the island the local pangerous came by to wave and point the way in. As we closed on the shore a fisherman waded out and helped us pull in the dinghy. We wandered through the tiny village—checking out the whale bone museum, stepping into the tiny church and buying shell necklaces from Senora Clara. 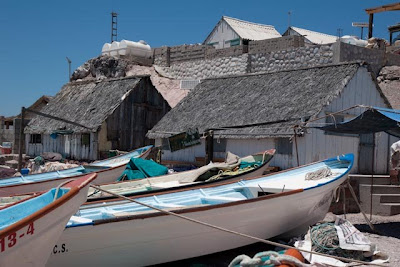 When we asked why people lived on the islet Clara explained in rapid fire Spanish how her husband's family had, had fish camps in other locations but then ended up permanently on Pardito. She may have told us the reason they ended up on the strange little rock—when all around are comparatively lush islands—but our Spanish wasn't up to the task of sorting that one out. 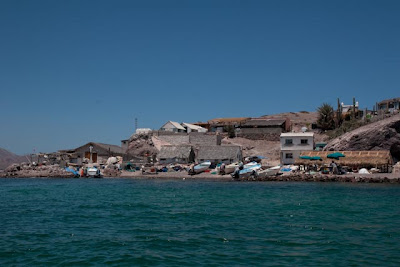 We learned from Clara that water and food come from San Evaristo—about 6 miles away. Or La Paz, 50 miles away. And that the children (there are currently five living on the islet) are schooled and boarded in La Paz and only return home for holidays. Life on Pardito is hand-to-mouth subsistence and we bought a half dozen pieces of Clara's pretty shell and bead jewelry—knowing the money makes every bit of difference.
It's hard not to feel like a tourist in a strange land in a place like Pardito; and wonder what life would be like there. Maia speculated we could walk around the entire island, including zigzagging across every dusty trail, in less than ten minutes. And as we wandered down to the shore, where the fishermen were preparing their day's catch to take to market, we tried to imagine ourselves living in such a place. 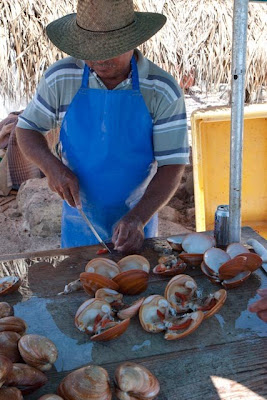 There were five other boaters down at the fish shacks—charter guests from Mexico city. They invited us to have freshly made (as in in front of our eyes) clam ceviche with them. As we chewed through Chocolate clam after clam doused with lime and chillies, one of the Mexican men told me he had been visiting the island for 30-years and that it hadn't changed in all that time. He told me that it was a special place that he loved bringing people too. I looked around at the weather-tired shacks and barren rock, and glanced at the jagged reef, washed with currents and bubbling with fish—and saw a hint of what he seemed to feel.
I asked if he knew why the first fishermen had settled on Pardito. "I never thought to ask them," he told me as he passed me another clam and with that simple gesture teaching me: it's enough that they are here.
----------
radio email processed by SailMail
for information see: http://www.sailmail.com