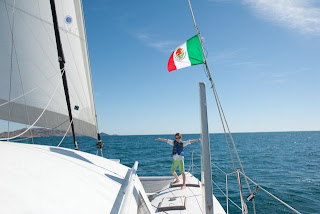 We left the marina in Ensenada when the docks threatened to break apart. As surge from a passing storm funnelled into the harbour the docks would lift--1 maybe 2 feet. The boats would be wrenched sideways and the whole setup creaked and groaned as boards pulled loose. You’re not supposed to anchor in Ensenada, but as conditions worsened we were told to go out, we’d be safer, the docks would be safer. On the hook it was calm, it was easy to forget there was swell surging in and a storm passing by. We waited for the system to pass, then headed south 250 miles, searching for a Mexico we both remembered.

Last time, I discovered the Mexico I’ve grown to love in a harbour called Turtle Bay. There we met two fishermen, Ignacio and Alfredo. They came to sell us fish and, not knowing it wasn’t done, we invited them aboard and gave them cool drinks. After that they brought us a new fish everyday, but wouldn’t take money anymore, we were friends now. For three weeks they would visit us with fish and a recipe for cooking it, or invite us to shore for celebrations. We learned our first Spanish from them. I baked them their first chocolate chip cookies. 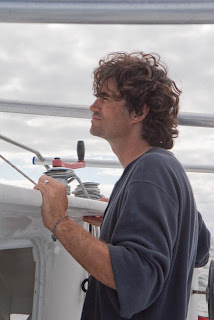 One of my first published stories was about that friendship, and as we approached Turtle Bay, I decided wanted to give Ignacio and Alfredo the book their story is in. I thought I could find them in the dusty little town, which is so far from the highway and so tied to the ocean. But just hours after settling in, while we were still relearning our way though the maze of narrow streets and poor cinderblock houses, we discovered another storm was coming. This one would leave us exposed to wind and swell in Turtle Bay. So we left--with me glimpsing but not grasping the memory of how it feels to love Mexico.

We had to outrun a building South Westerly storm. In our little boat we never would have tried. We would have hunkered down in Turtle Bay and held on, knowing we were safe enough, just not comfortable. With the cat we can flee. 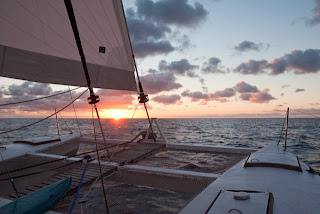 The sunrise at the beginning of my 6am watch.

Our boat does not sail like a monohull. It’s taken me time to trust the feeling of dancing over waves rather than slicing through them. We skitter and shudder in a way that our little cutter never did. But we’re fast and we don’t heel. And as the wind shifted from our nose to our beam and the seas built to a steady rhythm—it felt like we flew. Eight knots is my favourite speed on the beam. And heading downwind, surfing on huge swell, ten knots can feel good. Beyond that it gets too loud and too much like ice skating down an incline out of control.

We watched the clouds fill in around us and felt the seas build higher. We sensed we were on the edge of something powerful. Then, after 42 hours, we entered Mag Bay. All around us we could see signs of Gray whales. The females are here to give birth next month. And the spray from their blow holes is like a mist. We watched their slow progress, head, back, tail, breath as they swam all around us. 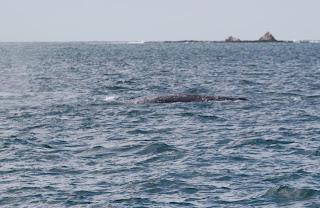 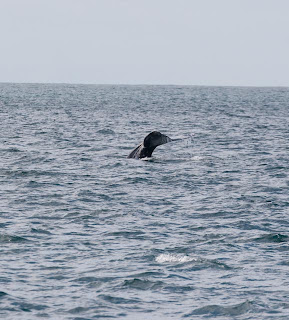 We sailed up the bay, not wanting to add motor noise to their silence. Then we anchored off a village of 110 adults and 30 children. Soon the Port Captain came out—we gave him our documents and served him tea and cookies. We spoke halting Spanish, searching for words, making mistakes. I think he understands English though.
I thought this the last time when we met him too.

Sorry about the funky pics and the lack of captions. We're using a v.e.r.y. slow connection via cell 3G modem and something went odd during the upload. I'll switch them out eventually.

I'm enjoying following your adventure. One small quibble however, I don't believe the whales are feeding in Mexico, just giving birth. Then back to Alaska to feed.

Thanks anon - I hadn't even thought about it. I assumed they ate something while they swam around. They are amazing. We feel so priviledged to be here.