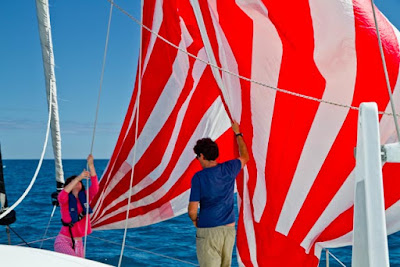 It’s been a while since we’ve done a tally—but I know some of you love these sorts of nitty gritty details. So the facts:
We’ve sailed 37,000 nautical miles which equals 68,524 kilometres or 5,710,000 boat lengths.
We departed Puerto Vallarta April 9, 2011 and crossed our outbound track January 11, 2017 (as an aside, Evan and I met at Sailing Instructor School January 11, 1986).
In that time we’ve visited 31 countries, learned to say hello in 15 different languages and negotiated haircuts in seven of them.


When it comes to food, there were lots of things we ate that you won’t find in a typical North American grocery store: some of the more memorable items included itty bitty crabs (which were either still alive or just wiggled reflexively when you picked them up), a really not-delicious fermented breadfruit called mahie or poi, Morton Bay Bugs (if only for the name) iguana, lion fish, zebu and kangaroo.
There were lots of new foods on our journey—including about ten different versions of a leafy green vegetable that always went by the name spinach, even though none of them actually looked like spinach—but eggs, onions, green beans, rice, lentils and chicken were universal.

For reasons known only to giant processed food corporations Magnum ice cream bars, Mentos and Pringles chips are treats you’ll never have to go without when you sail around the world. If that’s your thing…

Onboard, among our other stores, we carried (and consumed) 34 litres of maple syrup. We’re Canadian. Don’t judge.

We paid for all the maple syrup using bank cards and credit cards which were cancelled or expired before we managed to get replacements four times. We discovered our cards should have been activated in Canada *before* they were sent to us on one occasion. In case of emergencies we carried about 1.5k in USD.

On the topic of food our most memorable restaurant meals were at Hacienda San Angel in Puerto Vallarta and an underwater restaurant called Sea at Kihavah Huravalhi in the Maldives. Both had incredible ambience and amazing food. The pizza place in Nuka Hiva gets an honourable mention because who doesn’t love pizza after their first major ocean crossing.
The most memorable cocktail which we absolutely didn’t imbibe in at Napoleon’s tomb on St Helena in commemoration of his death because the French consul doesn’t allow that sort of thing was definitely not a 2010 Vin de Constance. But had we snuck into the tomb after dark, with friends who won’t be named, on the 195 anniversary of Napoleon’s death, I think it would have been fitting to drink the same wine from the same vineyard which he had shipped to him. But it didn’t happen. 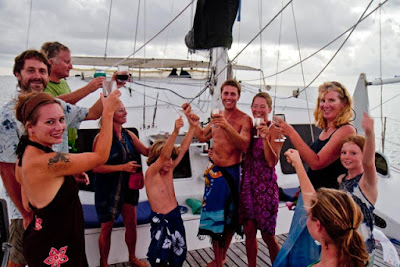 Most incredible potluck with friends: a tie between one of our goodbye dinners on St Helena, Amanda’s birthday on ‘the best day ever’ in the Tuamotus and the last potluck of our Pacific crossing which was on the beach in Chesterfield Reef with the remnants of all our fridges (because we all wanted one final day).
Favourite Village: Gunu Village in Fiji. For so many reasons; we were warmly welcomed and made to feel part of the village.

Favourite snorkelling, in no order: Motupuapua pass on Tahanea in the Tuamotus (black and white reef sharks, giant manta rays, gorgeous coral and crazy clear water), the reef off of Ile Mapou in Chagos (turtles, sharks, more turtles and so. many. fish.), The Alors in Indonesia (so clear, so much colour), Chesterfield Reef (BIG sharks) and Tanikely in Madagascar (we really love turtles and there were so many turtles).

Maia hung out with the cats, dogs, monkeys and burros in every country we visited except the Maldives (mainly because we didn't see animals there) and Chagos (unpopulated).

On the topic of snorkelling, we swam with: sharks, stingrays, dolphins, manta rays, lion fish, whale sharks, turtles, wobbegone sharks and a whole bunch of other cool stuff.

Our favourite hikes were a combination of gorgeous, historical and interesting: The peaks on Nuka Hiva, Cook’s Look on Lizard Island, Australia, Nosy Komba, Madagascar and Jacob’s Ladder on St Helena. 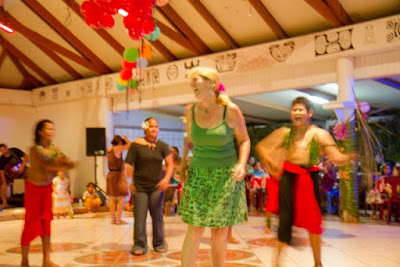 We participated in a cultural event which included some sort of dance in 15 different countries.
For weather, we only had two passages where we experienced extended winds of 20-25 knots. Most of the time we sailed in winds in the 15 knot range. The least wind we had was on the passage from Sri Lanka to the Maldives (a couple of days of 0-4 knots) while the windiest was the Seychelles to Comoros.

The warmest waters were in the Indian Ocean, we saw temperatures around 30C and the coldest were of South Africa's west coast where it was a chilly 14C.

In boat related stuff we went through three used outboard engines: our old Enduro died in the Marquesas, its replacement was stolen in Australia and that engine’s replacement is still going strong.
For dinghies, our original plywood dinghy was stolen and the replacement was later retubed in South Africa.

As far as theft goes our dinghy was stolen in Brisbane and we were boarded and inefficiently robbed in the Seychelles.
Our most reliable piece of equipment was our Spectra watermaker.
The least reliable was the bloody Quick windlass. It’s Italian. We should have known better.
We put 3700 hours on our engine—a reasonable number of which were used to provide power on cloudy days in Brisbane. We kept it running by using a total of six fuel filters.

Our most common repair at sea was fixing our kick-up rudder (until Evan changed the design so it was no longer able to kick up) or untangling from a floating fishing net.

We were involved in rescues which ranged from bringing an engineless boat into harbour, searching for a boat which was firing off flares, recovering an elderly man who had fallen in the water and assisting a boat which had gone up on a reef.

In random trivia we experienced 1 flood, 3 tsunamis, 2 earthquakes and discovered uses for palm coir that include being made into bricks for a ‘mattress’ in a Sri Lankan guesthouse and being mixed with epoxy for a rudder repair.


Our lap of the planet gave us the chance to meet a mayor, a governor, dozens of scientists, incredible artisans, philanthropists, activists, plantation workers, fishermen, musicians, teachers, farmers, vintners, cooks, authors, film makers, doctors, nurses, world-class sailors and so many more. Our lives are immeasurably richer—much more than this count can ever show.

B Jordan said...
This comment has been removed by the author.
9:39 AM


After such an adventure my wife and I fear Maia may never find a mate who can keep her entertained LOL. Here's hoping she does, good luck to her! It was wonderful to follow your journey all these years. You all are master sailors and Diane a wonderful writer. Best of luck on your new landlubber adventures coming soon.

Epic journey and fantastic round-up, Diane. No doubt so many wonderful moments left out in the interest of brevity.

That's why we all need to go back and read through your blog!

Thank you for sharing your journey with us!

What will your next adventure be?

(BTW - we only went halfway around the world... and are in the midst of transitioning off our boat to travel Australia by van).

Really interesting to read. Thanks for sharing.
We are going to become a liveaboard family soon! We will cruise in the Caribbeans at first. We are Canadians too and will bring some maple syrup with us ;)
Our blog (in French) : www.zenroots.com

Eating lion fish? I remember a discussion years ago that promoting lion fish as a delicacy might help eradicate them in the Solomon Islands. Or was it Florida? Sounds like it may have happened! Where did you have them? Were you just used by the locals to help eradicate a pest, or was it really a "delicacy?" :)

Thanks for all the comments! Maia wonders if she'll ever be able to stay in one place. I guess time will tell. Re: the lion fish there were a few places that locals eat them as part of an eradication effort. In Tobago, they go as far as to give directions on catching, cleaning and eating in all the fisheries literature. We had ours in Tobago at beach BBQ. A cruiser had been taught to prep them by our very cool customs agent and passed along the skill.