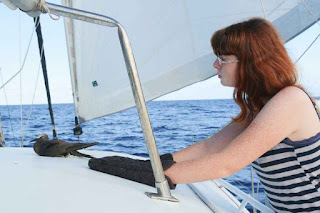 My mum woke me early in the morning, to point out an injured black noddy, a tern. It was perched on the roof, its legs entangled with polyethylene fibres. They're small seabirds, with a long hooked beak and sooty plumage. Apparently, they're very comfortable with humans, to the extent that they can be picked up off their nests. This one was not as sociable. We tried several times to capture it, because it was clearly having trouble flying. I approached it slowly, oven mitts protecting my hands, but it flew away. It returned in a few minutes, and we tried to capture it with a towel. It flew away. Luckily, when it came back, it perched on the side deck, an easy place for us to reach. My dad captured it, wrapping it firmly in a towel before returning to the cockpit where I waited with scissors. It took us a few tries to find the feet, in the towel, (we kept getting beak), but we managed it and took turns snipping at the plastic. It had wrapped tight around its lower and upper legs, but we didn't realize how bad the damage was until we cut away the trailing fibres. On its upper leg, a tight band of plastic was almost cutting off the leg, and it was badly infected. It took quite a while for us to ease the bloody polyethylene off, but we managed. The leg was almost severed, and removing the plastic made it start to bleed. I dabbed some antiseptic ointment, with a general numbing agent on the wound, and we released it. Hopefully, we helped it survive and possibly keep the leg. BTW this is Maia writing, in case you didn't realize.