Our plan was to have explored Ascension fairly fully by now—but conditions have conspired against us. A phenomenon known locally as ‘the rollers’ means a large northerly swell (combined with the standard S E swell) has made getting in and out of our dinghies at the pier soggy at best. 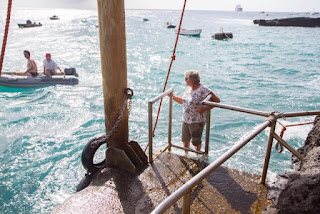 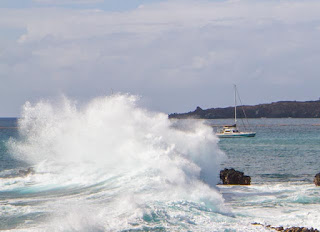 A couple of days ago, when we planned a day of exploring, followed by an evening at the 42-seat cinema, we braved the big swell. With an eye out to sea we timed our arrival at the dock and unloaded one person or bag per wave. Frequently a large set of swells would wash over the pier steps soaking whoever wasn’t lucky enough to have leapt out of the way and the dinghy would be forced back into deeper water. Eventually though, all of us and all our possessions were on shore and the dinghy was secured. 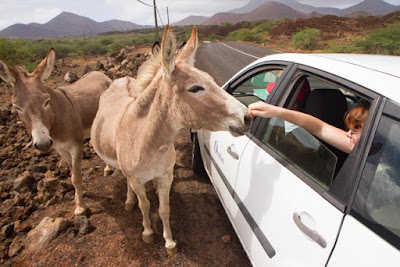 We had hoped to rent a cheap car through the petrol station in Two Boats—but learned all their cars were booked until July. So we went with the more expensive ‘new’ cars at the Obsidian Hotel (ours had 80,000 km on it) and set off on the island’s 40 km of roads.

Two hours into the journey we’d seen the old NASA base, the airport, the endemic land crab, a few feral donkeys, the grocery store at the RAF and scouted out the base of Green Mountain. Covered in heavy mist, Green Mountain was living up to its billing as a manmade Cloud Forest and rather than risking a rainy picnic we headed to English Bay for lunch. 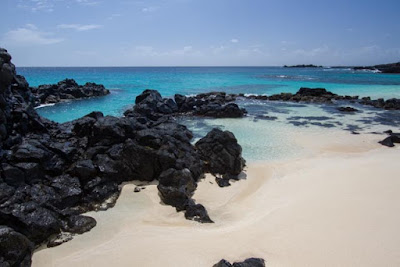 The white sand beach is fringed with black lava and is popular with locals (the island has a population of about 1200 spread between the Royal Air Force station, US Air Force, European Space Agency rocket tracking station, a super secret intelligence facility and the BBC World Service Atlantic Relay Station) as well as turtles. Thousands of Green Turtles nest here from November to May every year. 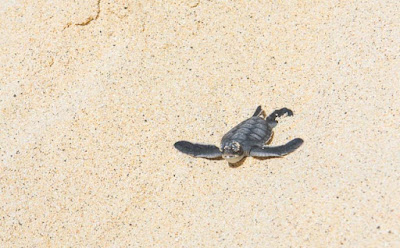 While we were there one little hatchling charmed us by popping out of the sand. A Frigate bird had just made a meal of one of his siblings so a group of beach goers provided an escort down to the water’s edge. 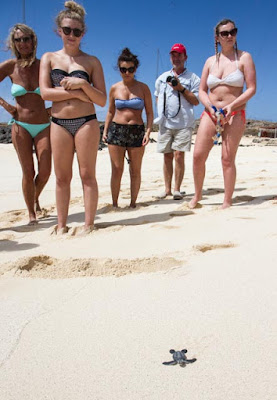 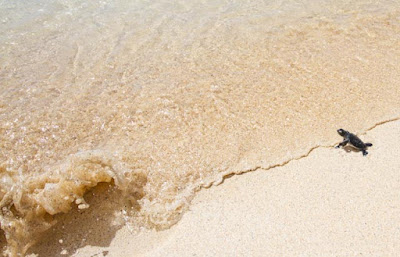 Hatchlings are supposed to come out at night. And as we waved off the birds, and tried to make the little guy’s pathway as hazard free as possible as he flapped his way awkwardly through the hot sand, it was clear why hatching in the cool darkness makes way more sense. Finally though, the little creature made it to the water’s edge and swam off to the cheers of his honorary aunties and uncles.

A few minutes later he was in deep, clear blue water. Then a frigate bird swooped down, scooped him up and ate him.
Occasionally, nature is an asshole.

With our good deed ending in a Frigate’s gullet it was time to get back on the road and head up Green Mountain for an afternoon hike. But then the car broke down. 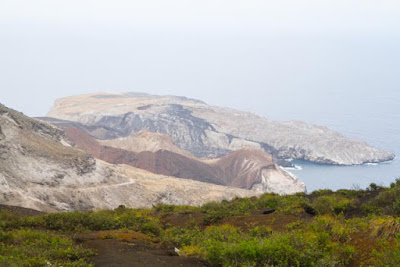 And so ended that adventure.