About four weeks ago we decided set off for South Africa. When I wrote the post letting people know what we were doing, I promised to share our route and our plans in the next blog post. Somehow repairing a broken dagger board, a shattered catwalk and a leaking hatch as well as provisioning for the next 8-9 months and catching up with a variety of old friends got in the way of actually thinking about the fun part of our plans; the travel. But as we hit countdown mode (we’re aiming to depart mid-weekish) I thought I’d answer a few of the questions have come in from friends, family and the occasional mean stranger (who still write to tell me what a bad mother I am and to ask about pirates…) 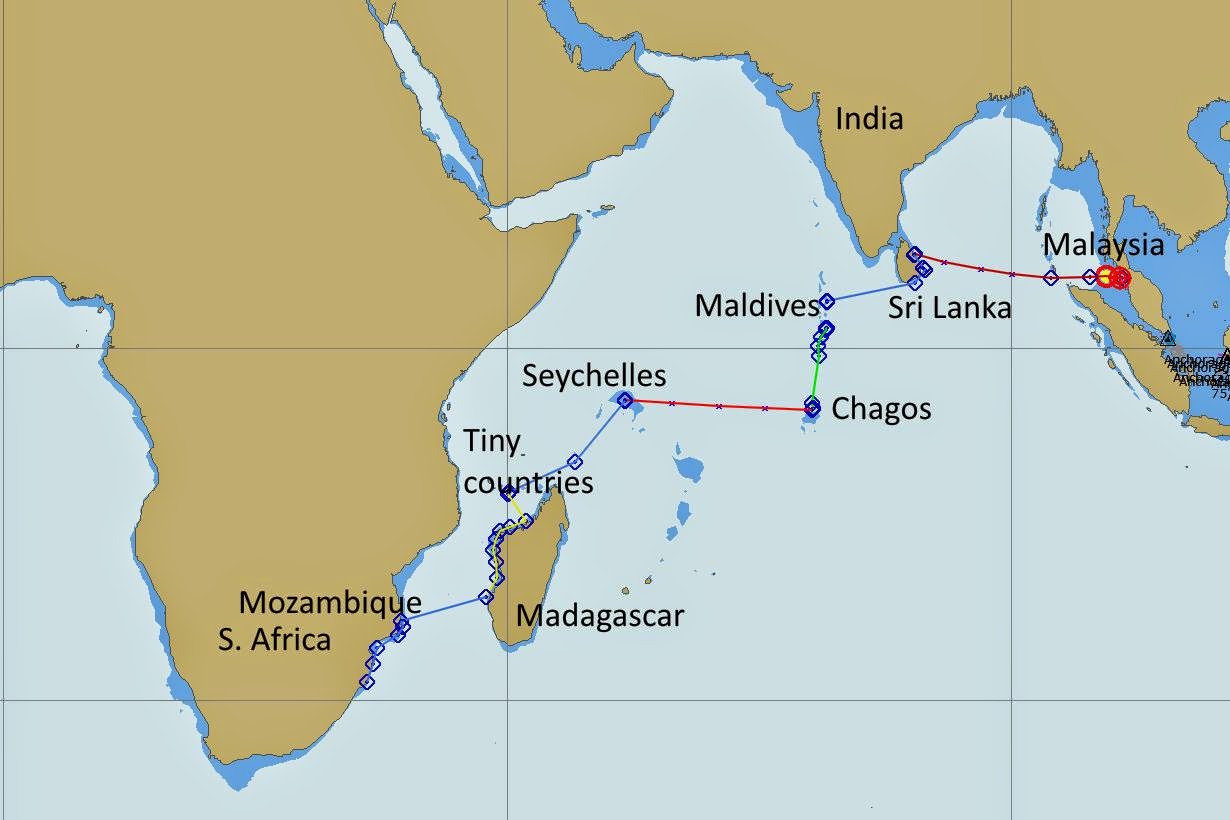 So, where the heck are you going and will there be pirates?

The most popular cruising route through the Indian Ocean used to be from Sri Lanka across to Yemen and into the Gulf of Aden through the Suez Canal and into the Med. But after a long civil war Somalia’s government collapsed. With no government (hence no navy or coast guard) local fishermen lost their livelihood to illegal fishing by foreign trawlers. Not surprisingly the fishermen took it upon themselves to fight back and some of them discovered stealing boats was more lucrative than fishing. Piracy soon emerged in the unpatrolled waters off of Somalia and even small yachts were attacked.

So we’re not going that way.

Our plan is to go around South Africa—arriving there in time for their summer (Nov/Dec/Jan). With that as a deadline, we have two basic options. One is the Southern Route—boats leave later in the year and do longer passages to Cocos Keeling, then the Mascarene Islands (Reunion and Rodrigues), on to Madagascar and then Richards Bay, South Africa. The benefit is you get more time in SE Asia and get the whole Indian Ocean done quicker. The risk is you are making longer passages and are exposed to the weather for much longer periods of time. This route tends to have stronger winds and rougher seas.

We’re not going that way either.

We’re departing on the Northern Route. This route will take us eight months, or so, and give us a chance to visit some pint-sized countries and remote atolls. From Langkawi we’ll be sailing about 1100 miles to Trincomalee, Sri Lanka. After a few weeks there, we’ll head on for two months in the Republic of the Maldives—a chain of 1,192 islands that stand in the Laccadive Sea and where they speak Maldivian and spend rufiyaas to buy access to reportedly great 4G.

From there we’ll head another 450 miles to the Salomon Islands—part of the British Indian Ocean Territory (Chagos/ Diego Garcia) where no one but sailors who are on their way across the Indian Ocean and sailors who are part of the military are permitted to visit. From there it’s on to the Seychelles, Comoros (which is the third-smallest African nation by area), Mayotte (an overseas department of France), Madagascar, Mozambique and South Africa.

Clearly we chose this route as a geography lesson for Maia. We also love the fact that four other teen boats are making the trip at the same time as us.

No, really, what about pirates?

We would never go anywhere we didn’t feel was safe. But that said, from the Maldives to Mozambique we’re technically inside the ‘box’ where our yacht insurance won’t cover us for acts of piracy. We’ve been monitoring the situation though and in 2012 a joint action by several countries and shipping agencies successfully disrupted piracy to such a degree that yachts are beginning to go through the Suez Canal again. The region we’ll be in hasn’t seen any recent pirate activity at all.

We will pay careful attention though—there are a variety of agencies that track acts of piracy. If we feel it’s warranted we may change our route or got into ‘stealth mode’ where we stop reporting our position publicly.

How do you plan to communicate (in case of pirates)?

We’ve been really happy with our SSB. Combined with our Pactor modem we’ve never felt isolated and have been able to participate in nets, get weather and send emails. This said, it turns out there is a pretty significant gap in the Indian Ocean where reaching a Sailmail station (the way we get our weather and email) becomes tricky. This is also the area of the Indian Ocean that we’d want to be really up to date on any piracy concerns.

So with that in mind, for the first time in our lives we’re early adopters and have purchased an Iridium Go (a black box that lets us use our smart phone as a satellite phone and internet device). From what we’ve heard the reliability is emerging and they have a lot of bugs—but between the technologies we feel pretty confident.

In case of an emergency we’d set off our EPIRB. 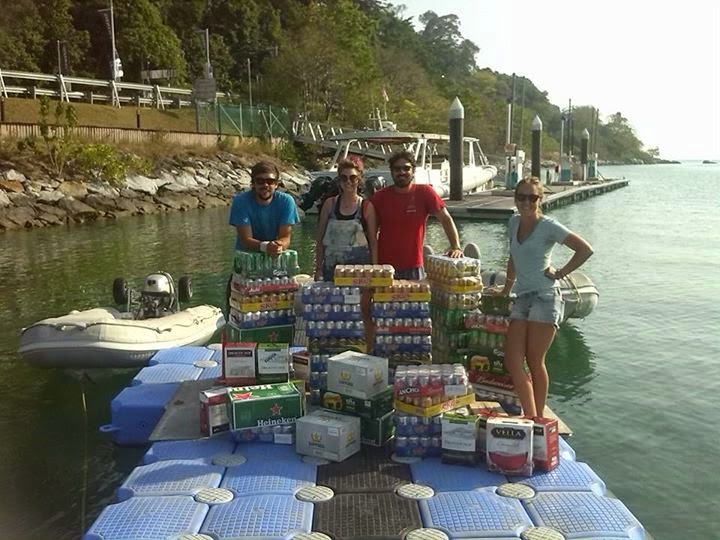 I saw that beer photo from your friend’s boat, isn’t there any beer out there? Do pirates drink beer?

No idea on the modern pirate’s beverage of choice, but it turns out one of the reasons yachts love Langkawi is that it’s duty free. If you’ve ever bought a bottle of wine in a Muslim country (or a rasher of bacon) you’ll know intoxicants and the pig are both haram and therefore both very spendy.

While there is no help for bacon lovers in Langkawi (you’ll need to carry on to Thailand for that—or spend big in the teeny-tiny non-halal section of the grocery store) sailors who imbibe tend to stock up the way anyone would stock up when they have unlimited access to $11 a litre gin. 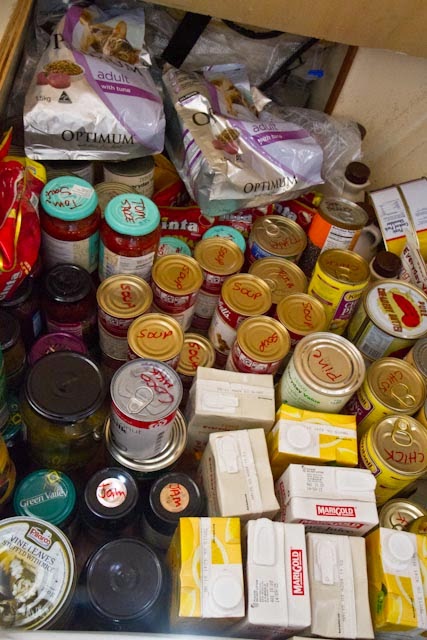 What other provisioning have you done?

The countries on our route for the next eight months are very small, isolated and poor. We’ll find the basics; so far every country we’ve visited has had lots of starch options (rice, taro, cassava, pasta, white flour…), onions, green beans and tomatoes have been consistent, as has some sort of tropical fruit, most have UHT milk and some sort of processed cheese, chicken and eggs are plentiful, as is tinned tuna and spam, some sort of bean or legume is usually around (though it may be hosting a protein)—so there’s always something to eat. What we buy are all the things to make a basic diet more interesting; everything from nice cheeses and long life cream, to tinned corn, olives and capers, to baking supplies.We also buy easy 'at sea' food when we find it. Maia insisted we buy out a store's entire stock of American clam chowder.

We also are restocking our medical kit and picking up a year’s worth of prescriptions and contact lenses. For the boat we’re making sure each system is in good shape after the last eight months of constant travel (cruising is like a dog’s year for a boat. One year of full-time cruising = 7 years at the dock.) and restocking the spares we went through.
Last but not least we're also stocking up on eight months of cat food and kitty litter. That's the way to keep a boat light...

This kind of a post makes your travels so much more immediate and interesting to me. (Not that the others don't.) Hope that chowder turns out edible!
Thanks, and fair winds.
Anon