Hose clamps are evil. They are trying to sink your boat or dash it on the rocks. Don't believe me? 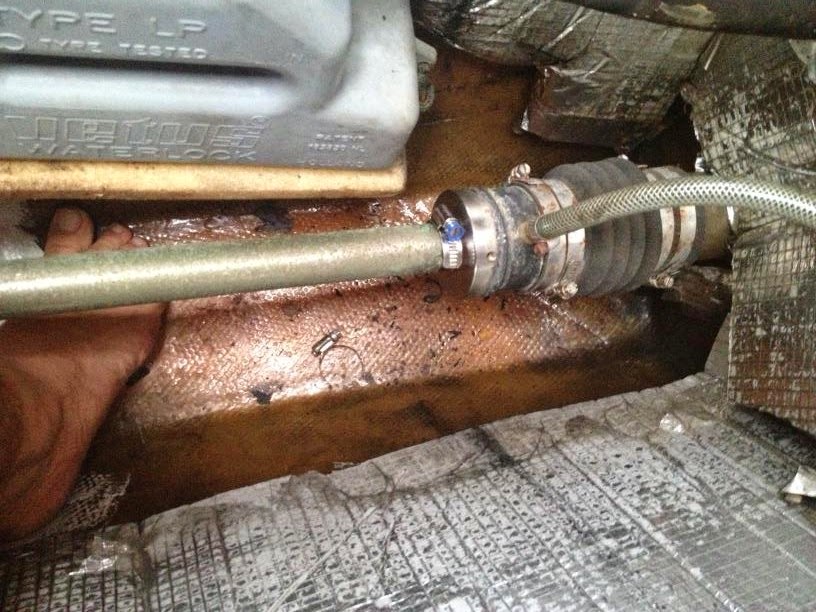 See that hose clamp on the bottom of the hull, about halfway between my foot and the shaft seal? It's a broken hose clamp. Its purpose is to stop the shaft seal collar from sliding forward, if it's set screws ever loosen off. Which they do - on our maiden voyage with the new engine we had a minor sinking emergency when that very thing happened.

So the hose clamp is just a backup in case the set screws fail. But it has fractured, no doubt due to very small amounts of salt water mist that the shaft seal lets through. A new one is in place, just to the left of the shaft collar. 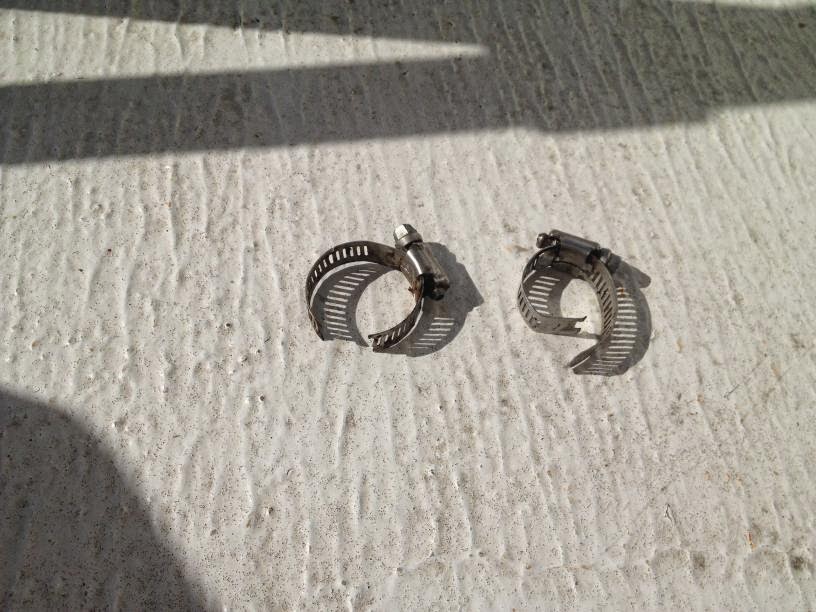 The hose clamp on the left is the one from the picture above. The one on the right is from the engine's fuel line. I was changing out our electric fuel pump (useful for priming the system after you change the fuel filter or in case the diesel lift pump fails). It came apart in my hand.  It looked fine. Had it failed in use, the engine would have stopped running due to air in the fuel line.

A tale of two masthead lights. Masthead lights (aka steaming lights) don't sit on the masthead, they are located on the front of your mast and indicate you are under power. Stupid name but that's the COLREGS for you. 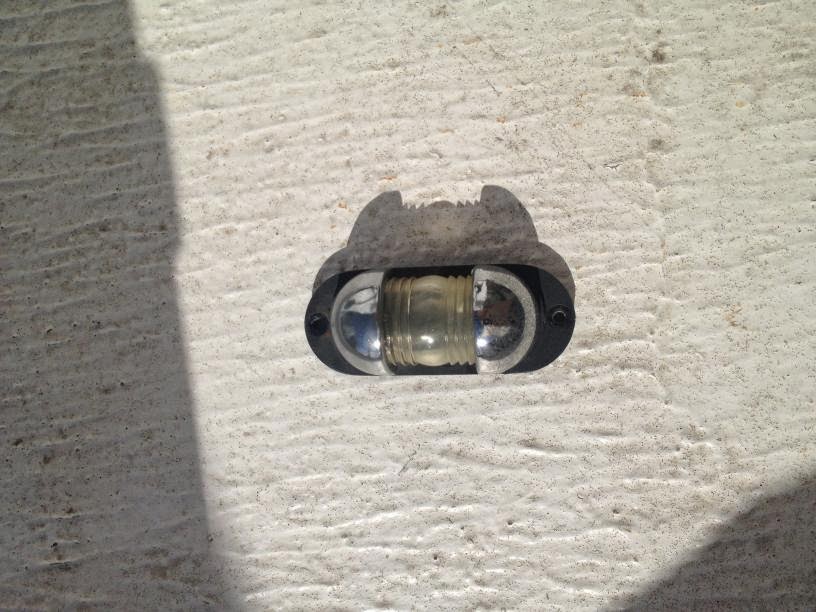 This is a Perko light. It is heavy, made of cast zinc and the design has not changed in at least 30 years. It is stupid. How do you change the bulb, dangling 20 or 40' in the air on the front of the mast?

1.  Remove the two machine screws holding the fixture to the mast 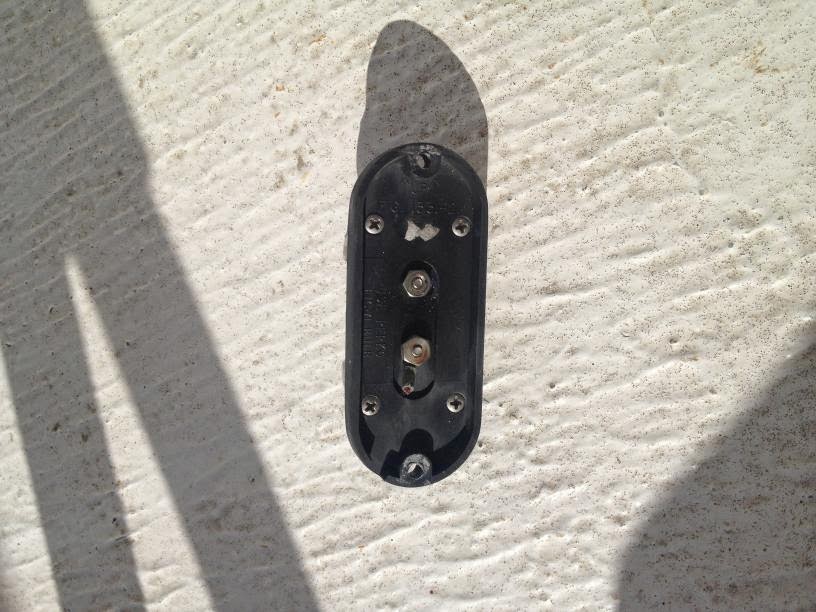 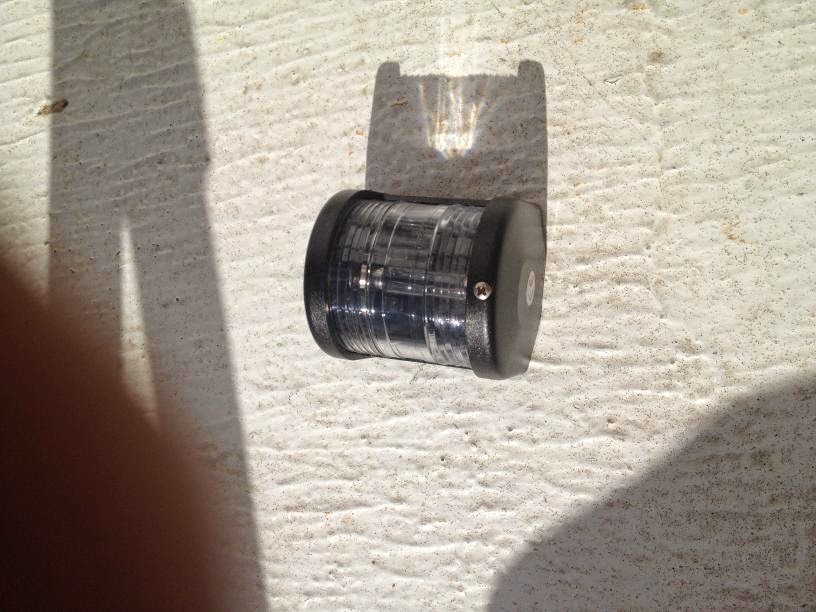 2. Flip over and remove four teeny tiny screws on the back.

3. The front lens then comes apart, into three loose pieces.  Which you have to hold into place after removing the bulb and screw back into place.

4. In doing so, you yank the semi-corroded wires from their nuts.  No problem, just loosen the nuts and re-attach the wires.  However the nut also holds the bulb holder inside the fixture. So when you loosen the nut, the bulb falls inside the fixture.  Go back to step 3.  Design like this has no place on our boat. So I yanked the evil thing off and replaced it with this:


The new light is a new Aquasignal.  It has 1 screw to remove the lens and get at the bulb. Older versions had two.  Somebody at Aquasignal knows lights.

Email ThisBlogThis!Share to TwitterShare to FacebookShare to Pinterest
Labels: maintenance

Atta boy, one screw is infinitely better than two-never mind SIX !~! Ya done good with the new replacement. Is the bulb an LED, I hope ?

Is there a Chinese connection with the hose clamps?

I was hauling a bunch of metal recyclables to the local center, and took a neighbor's "stainless" grill in as a favor... the first thing the attendant did was pull out a magnet and apply it to the supposed 304 stainless and dump it into the iron pile...

For critical applications like your dripless seal, I'd use a stainless or zinc shaft collar instead.

I picked up a funky little tool at the PT wooden boat festival that turns wire into hose clamps. I've used for everything but replacing hose clamps so far, and it works great.

No, it's not a LED bulb; it's a masthead light so this light is only on when powering and the alternator is producing lots of amps.

The hose clamps were Trident, all s.s. I like AWAB too - but none were available at the shipyard where I installed the engine.

I'm not so keen on using a shaft zinc for the backup purposes. Less weight on the shaft between the bearings means less vibration. The dripless seal doesn't act as a bearing. The shaft is only supported at the gearbox and aft strut and is close to max unsupported length.