Raft up--The Pink and the Blue 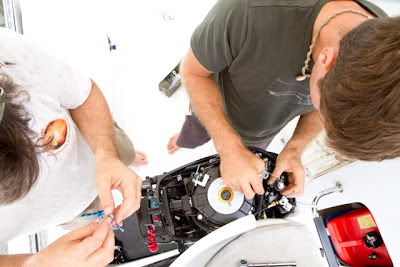 If you’ve been on a cruising boat you may have heard the phrase ‘pink job and blue jobs’ when it comes to stuff that needs done. Mostly the terms are used in jest to describe the 1950’s-style delineation when it comes to who’s found barefoot in the kitchen vs. who’s covered in grease and grime in the bilge.

The fact grime falls along gender lines is something my inner-feminist chafed at when we first started cruising. But when Evan asked me if I wanted to change the situation by rebuilding the head, or changing the engine oil I could have claimed I couldn’t because dinner would burn—but the truth is I don’t really like messy mechanical jobs though I'll certainly do them in a pinch.
Okay—so here’s the point in the blog where I should tow the party line and say the whole pink vs blue job thing is myth, and that while each person on the boat should work to their strengths both genders should be competent in all things boat. And while the idea has a lot of merit (heck—I even took a diesel maintenance course), the truth is most of us only have so much time in the day that we want to devote to chores and having someone who can build a remote throttle kit (without directions) while someone else replaces a damaged zipper and makes lunch means there is more time for the stuff you actually went cruising to do (hint: not repairing the boat in exotic locations).

Boat chores are a fact of cruising. And while you can try to hire someone to do the nasty stuff (good luck with that in more remote locations) typically this means one person is going to need to become mechanically competent while the other person develops strong support skills and becomes responsible for keeping the kids alive.
So the trick, as I see it, isn’t to decide who’s pink and who’s blue, but to come up with the way you work best as a team. For us this means Ev’s the project guy—he’s the engineer and knows how stuff works and why it does what it does. And I’m the people person—if a project is too big for him (or simply big enough to be a social job) I either chip in and help, or hunt down helpers and then supply the food, find the missing tools, add a an idea here and there, hide the hammer if it looks like it’s all going to hell and then pour the cold drinks when it’s time to celebrate, or quit for the day.

It took me a while to feel good about that role. It just felt so icky to be so, umm, pink. See the other problem with that 1950’s stereotype is it comes with a 1950’s value judgements about the worth of different types of labour. According to a pink vs blue stereotype managing to eek a fabulous meal out of sketchy 3 week old veggies, two tins and a box, while keeping the kid busy, helping hunt down tools and strategizing a plan 'e' for getting part 'd' to fit into slot 'a' because we've run out of spare part 'a's' is somehow less valuable than managing to actually fix a water pump with a borrowed part 'g' and duct tape.

But the reality is stuff needs to get done and someone needs to do it. And when we’ve done it (whether we’ve ended up covered in paint and engine oil, or flour and olive oil) we all need to be thanked and appreciated by our partner: Because this living on a boat stuff is hard, whatever the job.