Teaching a 10 Year Old About Love, Heroes and Yacht Design

The tack would have been unremarkable: We shifted through about 90 degrees and ended up plowing toward a pretty cove in the Bay of Islands. What made it notable was the skipper was Maia and the yacht was a legendary 80' maxi called Lion New Zealand.
“Did I do it?” Maia asked.
“You rocked the tack. Let's do it again.” Was the response. 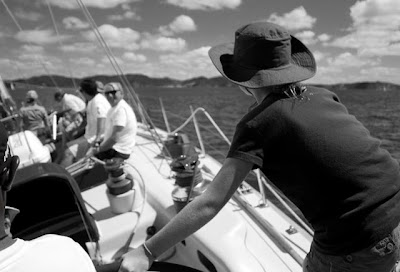 26-years ago, when I first met Evan, he and I were hooked on the progress of this very yacht. It was speeding round the world as part of the Whitbread race (which is now the Volvo Around the World Race)—losing a leg here, gaining a leg there and all the while it's skipper, Peter Blake was becoming a hero. Our hero. 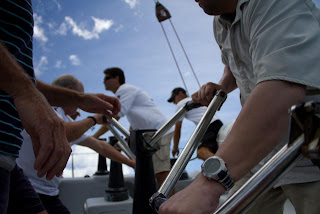 The yacht came in second. The design was too heavy. But a few years later Blake had another boat designed—this time by Bruce Farr. And this time he won. Then he went on to sail America's Cup boats—and when his team NZ won the cup in 1995, Evan I decided we needed to see the next race: in New Zealand. But then went sailing and turned left rather than right, and Evan got a job with Bruce Farr and started designing Volvo boats and the competition's America's Cup boats. And Blake and team NZ won again in 2000, becoming the first non-American team to successfully defend the Americas Cup . And then in 2001, just after he retired to work full time on environmental issues, he was tragically killed by pirates in Brazil.

We told Maia the story. And as she giggled about descriptions of a young Evan and I falling in love over a race and building a life's dream over another—I wondered if kids ever understand or appreciate love stories when their parents are involved. 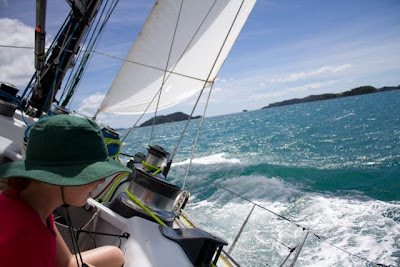 But then there was Lion. And as Maia held the wheel of the glorious old boat I wondered how much of a boat's magic comes from say the designer, or builder, or people who urge her across a finish line. And how much of this, I'll call it spirit, might flow through the wheel into Maia's hands.
Would she even understand what it was if it did make her finger tips tingle?
Or would she just think the tugging on the wheel was just the great boat feeling the wind and surging in the gusts... 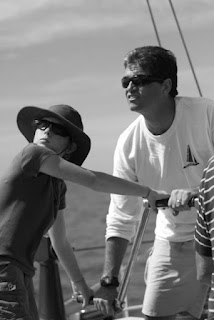 “The boat is so overbuilt.” Evan told me as he wandered around, marveling at how far yacht design has come. But I could see something else in his eyes as he shook his head over the winches and gazed up at the rig. I think because my mind went there too—to us; 26 years ago when we were entranced by a race, a skipper, and a dream, and we fell in love. 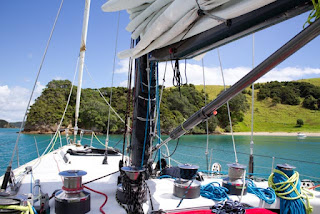 It's a dream we've followed haphazardly through the years as we've followed races, and design changes, and watched women and men chase their goals ever more rapidly around the globe. And if Maia didn't feel the magic when she held that wheel, and tacked a huge boat she could barely see over the bow of--I did.

So nice! I'm curious how you guys come to sail on the boat...?

Lion New Zealand is owned by a trust with the goal of getting the people of NZ (and tourists) out on it. We went sailing on it through Explore New Zealand.