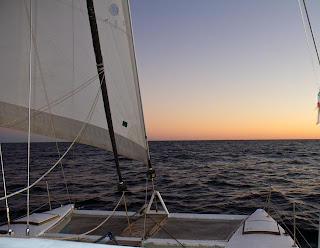 Thursday
We're headed south. The wind is about 10-12 knots from our stern quarter and we're sailing in lumpy seas. The wind's dying though. It clocked around from ahead and as it did our speed dropped to 6 knots, it feels a bit like we're wallowing toward La Paz. And wallowing makes me queasy. Maybe it's simply sailing for the first time in six weeks that makes me queasy. Or maybe it's the fact we stayed up too late and drank too much with the new friends that we hope someday will be old friends that makes the start of this passage feel less than lovely...
Evan, Maia and Charlie are napping. In an hour or so we'll eat dinner and watch the sunset. Then the long night will start. There won't be much moon--but the stars will be bright. La Paz is still two days away--maybe by the time we arrive my sea legs will be back.
But for now I type, stare at the horizon and think, type some more and imagine flat seas, or a smooth stomach. 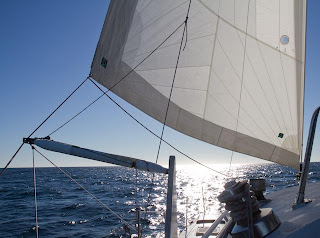 Friday
Despite the forecast for light and variable winds dropping to calm, the wind clocked to our stern and built to 12 knots or so by this morning. So we've been sailing since we left--averaging 6.2 knots--even with a few middle of the night hours of 3's thrown in there. Our original plan had been to explore our way south to La Paz--stopping in at a few anchorages we missed. But Evan has work waiting for him in La Paz--and with the slow internet connections (aka difficult work connections) of the South Pacific in our near future, we're both trying to squeeze as many work gigs as we can out of the next few months. We enjoy cruising more when the coffers are full...
The trade off for not stopping is we are enjoying what has become perfect sailing. The Sea isn't known for steady winds or smooth seas--and while the seas certainly aren't long even swells--the simple fact the wind and waves are both coming from the same direction is a huge treat.
At our current speed we'll hit La Paz sometime in the middle of the night. So we may pull in to one of the wide open anchorages just outside the harbour and wait for daylight. Maia has already begun planning our first dinner ashore--she points out this is the first time she's returned to a harbour after a long absence and she's beginning to get excited about seeing places she likes and doing the things she's missed.
We're still going to miss all the people who won't be there with us this Christmas--but her confidence in the fun we'll have is making me excited too. 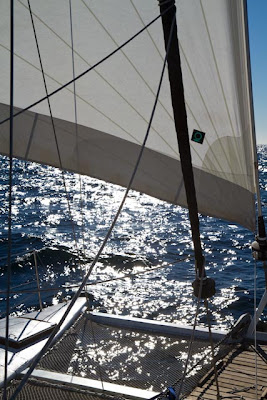 Thanks!! The stars were gorgeous. Made me get excited about the 3-week passage to the South Pacific.

So where are you guys heading after La Paz? Did I read South Pacific?