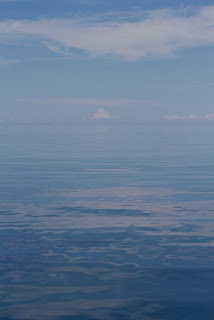 We're making the 45 mile passage from San Jaunico to Bahia Conception. Our plan was to start early and then catch the afternoon breeze and arrive mid-afternoon. But now, at 3pm, with miles still to go, the sea is as calm as I ever seen it. There is barely even motion on its oily surface. The air is hot, humid, and still. The only real movement we see is from living things and growing thunderheads.
The thunderheads seem close. But I've already discovered that a flat sea distorts distances. We watched an island (which seemed close enough to land on) never grow nearer-just slightly larger. I know from the geography of the place that the thunderheads are really on the far shore. 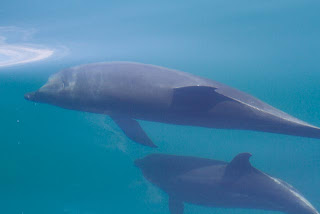 When it's this flat, and this hot, there is nothing to do but stare into the ocean. It's better than TV, Maia says. You need to know she has never had cable... But we do see things in the flat water we’d never see when there are waves. The hump of a turtle’s back is clearly silhouetted, as is his head when he raises it to look around, and his back flippers, which show after he sees us and begins his dive. 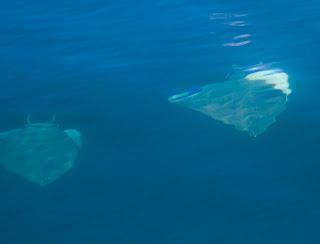 Under the surface we can see schools (flocks?) of manta rays—gliding along as though in flight. When they leap free of the ocean it makes me wonder if they are aching to be birds, if soaring away will be their next evolutionary step.
I think on a day this quiet that the sea creatures find us interesting too. How else would you explain the great numbers of dolphins that have visited and the rays that glide right up to the boat? An animal we could do with less though are the boobie birds. Three times one has dove for our fishing lures, almost becoming the only thing we've caught today... What amazes me is the same bird will dive on the same lure more than once. We've heard stories from other boaters who have caught a boobie, managed to free it (with no small effort and bloodshed on the sailor's part) only to have the liberated bird dive for the lure a second time. 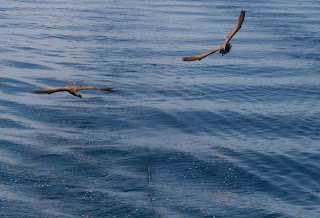 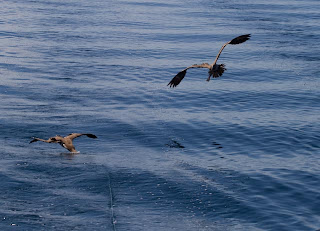 I've come to the conclusion their behaviour is out of optimism rather than stupidity though. And I've been pondering the question for a while. It's too hot, and too still to do much else... 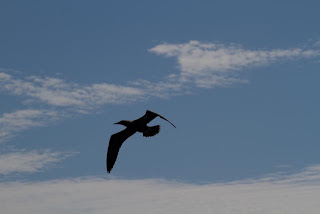 What great photos! I remember we motored in a dead calm from Miami to Key Largo on Christmas morning. The only boat out there I dare say... and every critter from sea and sky and land greeted us. It was magical.