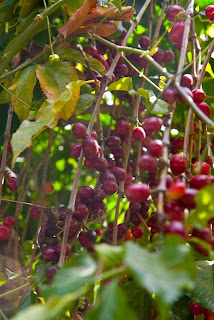 I woke from my morning sleep with a pounding headache, not from seasickness (although I woke with that too) but from caffeine withdrawal. I can't drink coffee (or alcohol, or eat many sweets) on passages. Sailing makes me go cold turkey with most of my vices. If it's not salty and crunchy, or sour and juicy, it can wait for harbour.
I'm shamelessly addicted to coffee though. Not to mediocre supermarket brands: No, my coffee is grown in the shade, without pesticides and is picked by loving hands. Then its dried under the warming rays of an affectionate sun, before being roasted to an inviting mahogany tone, mere hours before I buy it.
I love everything about coffee; from the rich flavour, to the pleasant buzz. I am a coffee snob who, in fits of caffeine withdrawal, dreamed about coffee this morning (although the cause of this may well have been the 7 pounds of San Sebastian coffee that is wafting aroma from the locker directly under my pillow.).
The first time we arrived in Mexico, I was elated. One of my favourite coffees comes from high in Mexico's mountains, and here I was – in Coffee Land. Our first morning ashore I sat down in a little restaurant and prepared to order breakfast. Priorities in order, I first requested "café, por favor."
"Café Americano, Mexicano, con leche, or typico?" The waitress inquired. Without enough Spanish to ask about the differences, I decided to plunge right into the Mexican culture with "typico". Eagerly I waited, imagining the rich aroma. Out came a tray with a steaming cup and beside it - a jar of instant coffee. Distraught, I ate my breakfast and ignored the "coffee". Then I went back to our sailboat and used up a few more of the precious beans I had brought from home. I drank down the elixir like the victim of a drought.
I headed out to the market to replace my dwindling bean stock and was directed to an aisle filled with jars – all filled with suspicious powder. There was not a bean in that store, nor the next. In the third store I found a dusty bag of unroasted beans. I promptly took them home and burned them in a frying pan, ground them, and then pathetically added boiling water.
At the next restaurant I tried a different option, "Café mexicano, por favor." I requested. Out came a steaming cup of water, milk on the side and instant coffee. "Café americano?" This got me hot, premixed instant and warm milk on the side. I was getting desperate, only café con leche was left. This sounded promising, it even looked promising, with its rich tones and heady aroma. But after my first sip the stale, bitter tang of instant coffee overpowered the subtle flavourings of cinnamon and chocolate.
It was time for extreme measures. Having coffee mailed from home was one option, but I knew there had to be another way. Coffee GROWS in Mexico, so it must be possible to buy it.
So we went in search of a coffee plantation.
When we first entered the village, we were sure we had made an error. The smell was so awful and so over powering I decided that there must be a Spanish word for "garbage dump" that sounds just like the word for "coffee plantation". What else could that smell possibly be? As we walked down the road, the source of the smell became evident. Spread out across several large, raised drying platforms were coffee beans. Ranging from carpets of brilliant red to the palest cream. The coffee beans were being raked, sorted and bagged by men whose lower faces were covered by bandanas.
"Yuck! How did people ever decide to drink this stuff?" Evan complained. I decided the best way to clear the smell was to head to the nearest restaurant and sample the local bean in its less smelly form.
We sat down on rickety chairs that were set randomly around on a dirt floor. I ordered café. The old woman shuffled over to the stove, poured hot water from the kettle, then took a jar of instant from the shelf. I was stunned and couldn't restrain myself as I jumped up, yelling "No, no! Eso! Eso!" Gesturing frantically towards the stinky part of town. The woman calmly nodded and told me I wanted the "Good export coffee."
She took down a pot and filled it with milk. As it heated, she hand ground some fresh beans then began to throw small handfuls into the steaming liquid. Next, she grated cinnamon chocolate into the mixture. Just as it started to foam she lifted it from the heat and poured it through a strainer into a chipped jelly jar. Solemnly she placed it before me and watched my face as I inhaled the complex aroma and filled my mouth with the flavourful brew. I detected rich oak, with undertones of nut and chocolate, hints of cardamom and a finish of warm cinnamon. Thoroughly satisfied, I drank two more cups and purchased several bags of the freshly roasted beans.
It's beans like these those, that I currently smell through my headache and my nauseated fog. I'm tempted to grind them and drink them, just to feel better, but that would take too much effort. And the coffee would turn my stomach. So I'll wait until we're in. Tomorrow I'll long for it a little less, and the day after that will be even better. I almost wish I had a little jar of instant though--just to make a quick chilled coffee...
----------
radio email processed by SailMail
for information see: http://www.sailmail.com

Email ThisBlogThis!Share to TwitterShare to FacebookShare to Pinterest
Labels: food

You crack me up you junkie. I hope you were being poetic and you really didn;t think that in a poor country such as Mexico they kept shade grown, organic, froo-froo coffee in country :) We joked while cruising Cuba that the chickens were genetically engineered without breasts. Same deal, the good meat was exported and we were lucky to get a leg bone. My dad grows coffee in his yard, shall I have him send some? ;) You're almost there deary, hang in there.

Hehe... I know how to find the good stuff now. Our Mexican friends told us where to get it: Costco.

Actually though there is enough of a middle class now that we can get decent coffee in the bigger cities. I've stocked up to cross to the Sea.

Which we haven't done yet.

It was miserable out there last night and as we listened on the radio to other boats having a nasty time, we realized one tack would take us directly to Mazatlan--so came in here. We still need to do the 200 mile crossing, but it's much easier to pick a 1-day window than a 4-day one.