San Francisco Days go on and on... 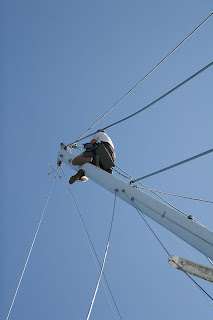 The weeks seem to be slipping by and here we are - still in SF. No further ahead than we were when we arrived.
Actually - we have made progress:
We have way less money now.
And our mast is held up by shiny new stays and lower shrouds. We're still waiting on the main shrouds because it seems who ever initially did our rig cobbled it together out of parts that our extremely experienced riggers say they have, "never seen anything quite like." So they've had to order a few unexpected things - which of course are on back order.

The upshot is they are impressed we made it as far as we did. Fab.

For the first week we were here I panicked about how far behind our non-schedule we were falling. In fact I was a pretty stressed right up until yesterday. But then, as we paid for an unplanned engine repair and I took on another last minute writing assignment (which will almost pay for the engine repair), I thought about all the loose commitments that pepper our calendar and tried to sort out how we could make it all work.

So we've traded the whole non-schedule, schedule for no schedule at all. We're now at the mercy of the wind, our moods and my work schedule. We're not trying for the South Pacific in March, not worrying about where we are for Christmas, heck we're not even sure where we'll be for Halloween - which we're not telling Maia, she's pretty sure we have that one in hand. 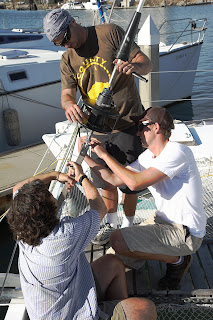 It's all sort of freeing - in a disturbing sort of way. I can't quite tell if I'm giving up or letting go - the two things can feel remarkably similar some days.

The thing is, living with this much uncertainty isn't as easy as people think it should be. Consider all those straightforward questions that people ask:
Where are you going next?
Where can we send you mail?
When would be a good time to hang out?
What are you doing tomorrow?
Would you like to order now?

None of them have answers.
None of them.
Well, we're pretty sure we're doing our laundry tomorrow and I'll take a beer, but aside from that, Maia's Magic 8 ball has a better chance of predicting the future than we do.

Hang in there girl, you are doing great. I think you lived on land too long and forgot that all plans made aboard a boat are like nailing jello to a tree, or something like that. Just enjoy the freedom take it one breath at a time.
On a different note -- who DID do your rig the last time around? Someone local in Vancouver?
Call if you need to rant.

Hey Cindy - the rig was 22 years old, so it really didn't owe us anything. Most of it was fine - just some of it seemed to be assembled from spare parts. We're just not sure what kind of parts.
Life is actually pretty good. The weather is awesome. We have a nice (free) dock spot which is convenient to a decent little town. SF is a transit ride away. Friends are near by. And I have more work than I know what to do with.
-d

I know nuttin' about boating, but I do know that if you're gonna be stuck somewhere waiting on parts.. San Fran is a pretty decent choice! Sounds like a great excuse to do some wandering about the city to me.. it really is an awesome place.

Hope your parts get there sooner rather than later ;)

SOMB - you are so right. We're really enjoying the city!