Transiting the canal is a highlight for most yachts and we’ve been fortunate enough to do it twice, in two different boats. Both times were mostly drama-free (we’ll get to the minor moments of excitement) and for far less effort than going around Cape Horn—after two days in the Canal we’re again back in the Pacific.

Unlike traveling by cruise ship or tourist boat, on a yacht it’s all hands on deck. Transiting can be a fairly busy experience. To transit we’re required to have a skipper (me), four line handlers (Evan and Maia + two volunteers, Russ and Diane) and our advisor.

The first time we transited advisors were still pilots—the same guys who take the big ships through. But with pilot wages reaching up to 1k per day, yachts were costing the canal money. So ten years ago a new system was put in place and canal employees who were interested could apply to train as advisors. 400 people applied for the gig and 60 were selected and trained. Both of our advisors do the transits on their days off and both call it the best job in the world. Their expertise and enthusiasm made our transit a joy. They really understand that yachtees are not just moving a boat—but transporting their hopes and dreams.

For boats that travel under eight knots a Canal transit takes two days. You transit the first three locks up to the lake, anchor in the lake over night and then transit the next three locks back down to sea level.

On the first day of our transit we were told our advisor would join us at 2:30pm for a 4:10pm lock time at the first of the three Gatun locks. So we arranged to pick up Diane and Russ—who were joining us for their 10th yacht trip through the Canal. We were super fortunate to get Diane and Russ (who run the Mad About Panama website), not only only are they self-confessed Canal geeks, but they were great company.

Our advisor Moises joined us once we moved to the Flats anchorage. He arrived tight on time--a shock to everyone (Canal transits are all about hurry up and wait). He asked us if we’d transited the canal before and we told him it would be our second time. “That’s great!” He told us, “This is my third time.”

In truth—he stopped counting at 500 transits. So between him and Diane and Russ we were in good hands. Because this is low season, not many yachts are transiting and we went centre chamber behind a small freighter (yachts are often rafted together and side tied or put centre chamber as a group).

Once we were in place the men at the top of the lock walls pulled up our heavy lines and secured them in place. As water floods into the chamber (we were lifted about 30 feet in each lock) the line handlers pulled in the slack.

In many ways while going in the centre chamber alone is more work it’s the safest for a yacht. Especially when you’re going up. There are a lot of currents in the locks and boats get pushed around. Having a line handler on each corner helps to keep the boat straight and centered.

Even still—the mixing of the salt and fresh water in the first lock combined with the prop wash from the boat ahead of us meant that when our lines were released and we first got underway we skewed sideways and were headed directly at the lock wall. We had rented eight tire fenders for our transit—so were fairly well cushioned, but the bigger risk of getting turned around in the lock is needing assistance to get out and slowing down the locking process—something yachts can be charged for. Luckily we missed hitting the wall and I straightened us out. 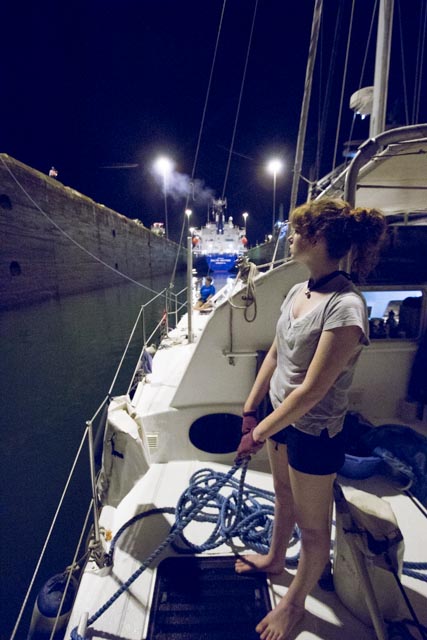 The next two locks were drama-free. Russ and Diane were expert line handlers and we felt really fortunate to have them aboard. They’ve seen all the things that could go wrong and offered tips as we went.

After exiting into the lake we anchored for the night. Moises went home and we shared a nice dinner with Russ and Diane. The next day dawned with a bunch of work boat wakes as the Canal sprang back to life. Roy, our new adviser for the day, arrived. The day also dawned with heavy cloud and by the time we were underway at 9am, the rains had started.

By 9:30am, it was clear the rains were unusual. Roy was advising me on how to make my way through the lake. We were traveling from buoy to buoy—which are fairly closely spaced, but the rain was so heavy we often couldn’t see the buoys. We also couldn’t see the ships, and they couldn’t see us.

In low visibility conditions (fog) all shipping in the Canal stops and when one big freighter was caught broadside by a squall and skewed sideways across the channel (requiring a tug to straighten him—and driving us well out of the channel to avoid him) the command went out to stop all the big boats.

It was strange to drive though the lake alone. Occasionally we’d catch sight of an anchored freighter—but for the most part the rain was so heavy we only caught the odd glimpse of shoreline.

Roy let us know we’d likely be three or four hours behind schedule once shipping started again. The rain had been so heavy—they needed to spill excess water from the lake to lower it. In the end, when we reached the lock at Pedro Miguel, we were able to enter the lock almost immediately and were side-tied to a tourist boat. We waited about a half hour (and were subject to an extensive Q&A with the tourist boat passengers) and then a big Ro-Ro (car carrier) showed up behind us. Meanwhile the lock started to buzz with excitement when a bunch of US military boats arrived and a submarine pulled into the chamber beside us.

Down locking was almost anti-climatic—but when those big Canal doors opened on the Pacific I had to wipe away a few salty raindrops.

Thanks for the great play-by-play Diane! Looking forward to our locking through in the next year or so... and to meeting you guys over the holidays! :-)

Well done and as alwayswell written. Congratulations on the transit to the big blue Pacific.
Hugs from Connie onboard Sage, still in Simons Town!

Well done and as alwayswell written. Congratulations on the transit to the big blue Pacific.
Hugs from Connie onboard Sage, still in Simons Town!

Transiting on a canal through yacht is amazing experience. I had a short journey on yacht and I don't have words to explain what I felt. Seriously I want to go again.