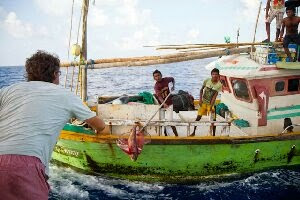 It's a huge thing to trade fish in the middle of the ocean, and your daughter (and ultimately, the world, through your daughter's awareness of it) will benefit.

Awesome post ! Really
It's a huge thing to trade fish in the middle of the ocean.......Thanks a lot for sharing your post !
I will visit regularly for update post!
Again Thanks !

Great post ! i have done all to often, also any sort of rack system or places to put things for easy access is a nice addition. i personally pick out a few lures i want to use and keep them in front of me all the time so i don't have to reach behind to my tackle box and make a racket getting that out.

Gofran said...
This comment has been removed by the author.
1:44 AM

Great post.
It's really great thing to trade fish. But most of the time boat crews are so wicked that you can trade with them. But It seems you look good with them in your article. Thanks for sharing. Good fishing trade.

Its awesome! I have liked this post because I love fishing. But sometimes, I go to fishing with kids.
They make noise and make very disturbing as a result I can’t catch fish.