All is calm this morning, if a bit sombre. Police boats are coming in from the Air Asia crash site—a tragic location we were set to sail through, but then the weather deteriorated and we turned back, abandoning our passage to Malaysia. The solemn parade of boats is matched by a quiet gratitude aboard Ceilydh though. Turning back may have done more than just keep us out of bad weather; it may have kept Evan out of serious harm.

Sailing in bad weather (with a seasick wife) tends to be a bit of an endurance sport for Evan. Sometimes he forgets to do the little things, like drink water. After a busy day of sail adjustments and pounding to windward we were back at anchor and ready to call it a night. The next morning though Evan woke up clammy and dizzy; a short while later, blood drained from his face and he collapsed. Luckily Sarah and I caught him as he went down.

As we steadied him, it was clear he was confused. He complained his heart was racing but when we tried to take his pulse it was so erratic it was hard to find. Pale and lethargic we set him up on the settee with rehydration drinks and began to look at our medical books. We carry Medicine for Mountaineering and two different Ship’s Captain Medical Guides. All pointed to some type of arrhythmia and indicated we should try to get outside medical advice.

Medical care in Borneo is poor. In an emergency the best option is considered evacuation. When you’re a cruiser though, especially in a really remote location with no marinas or other cruisers for backup, evacuation is a last ditch move. I also didn’t have a clear idea of how I would physically get Evan from the settee, into the dinghy and on to shore—if it came to that. Even with three of us—this could have been a difficult manoeuvre.

Our other option was to call for help from one of the Air Asia recovery boats—but we didn’t want to pull a boat off the crash site unless Evan’s condition was truly an emergency.

Fortunately I belong to a really excellent web-group of women sailors who are based around the world. When I put a call out for medical help I was inundated with support, information and advice and put in direct contact with medical experts who walked us through how to get a sense of how ill Evan was and at what stage we needed to get outside help. His pulse had no clear rhythm but stayed between 70-80 beats a minute—which apparently was a good sign. He also made slow improvements through the day—finally being able to sit up after four hours and stand unassisted (if unsteadily) after about six.

As we worked through our crowd-sourced medical intervention, it was clear that our seemly well-stocked medical kit had a few holes. I know how to take blood pressure—but the cuff and stethoscope we used to have became toddler toys and disappeared somewhere along the way. Also our medical-grade rehydration drinks had been used up and never replaced. We made rehydration drinks with salt, sugar and water and multivitamins—but having extra potassium and magnesium would also have been handy.

By dinner time Evan was steady enough to eat. His pulse was still abnormal but the dizziness had eased. Being New Year’s Eve he opted to skip the champagne but did manage to help set off early fireworks and blow the New Year’s horn. Then we danced a dance of gratitude. 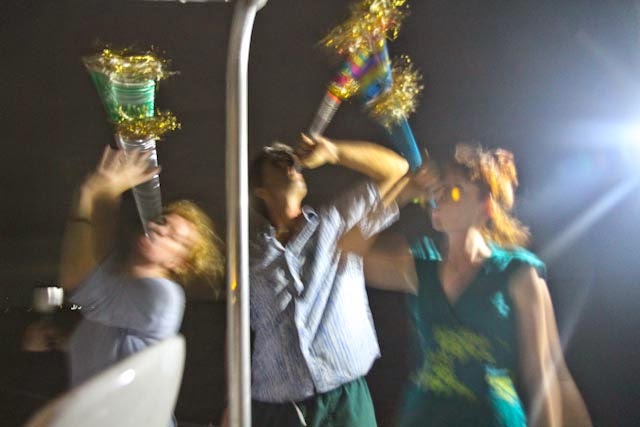 Our emergency was a reminder that our first step in safety aboard is all about preparation and self-care. Evan will be following up with a full check-up in Malaysia—but this morning his pulse is steadier and strong and he feels well. We are incredibly grateful that the women from Women Who Sail were so generous with their time, expertise and support. We’re a very long way from home—but through our scare we felt very close to a network of caring people from around the world.

I can't imagine how frightening that was Diane, but I am happy that you had such resources available to you. I hope all is well and this introduction to 2015 is the worst glitch you encounter all year. Prayers out to those helping with the Air Asia so disaster - but also in thanks that you are safe.

Sending thanks high into the sky for Evan's healthy recovery and hope for sustained cessation of symptoms and whatever's driving them.

Happy 2k15, may the rest of the year be less fraught.

Medical care in Malaysia can be a bit "iffy", my son lived there for 2 years at Johore Baru and would go to Singapore for any serious medical treatment, for himself or the little boys.
Hope Evan is feeling much better and you are able to restock all your medical provisions.

Scary - glad Evan is doing better. Take care of yourselves and hope 2015 is a wonderful experience!

Thanks for the good wishes and tips. It certainly seems that Evan is really sensitive to dehydration--so we're monitoring that closely while we hunt down a doctor.