Not ours sadly. As appealing as it is would be we, haven’t slipped the lines and set off for somewhere new. But we have had the privilege of following our dear friends Jim, Meri and Carolyne aboard Hotspur as they crossed the Pacific toward the Marquesas.
Evan provided them with weather routing and as seasoned shellbacks (ha!) Maia and I emailed them with tidbits of information and encouragement. Reading their emails and blog posts brought back a lot of memories of our own crossing three years ago. One thing that felt familiar was their initial unease followed by a palpable joy and excitement as they found their rhythm and discovered just what a wondrous experience crossing an ocean is.

It’s not always easy—like us they had their fair share of breakdowns and testing moments. But I think joy comes from not being knocked out by them—by reaching down through the fear and frustration and discovering you really can make it to port on a broken rudder (us) or that you have the skills to fix an autopilot without directions, several times (them). The fun also comes from being a family out there—you’re together, alone in the middle of the ocean, every minute of everyday, and somehow sometime after you arrive and the world gets busy again, it feels like it may not have been enough. 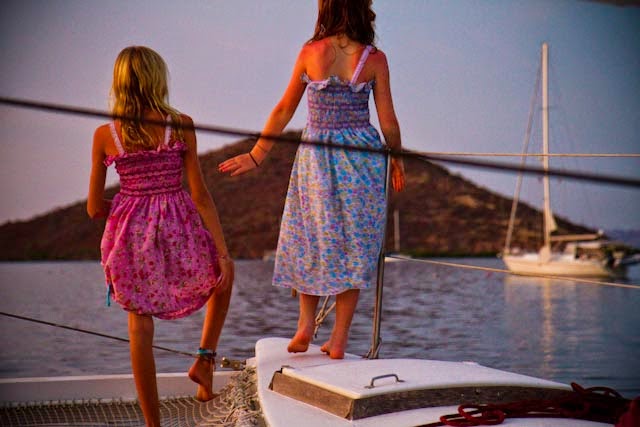 I’m excited and envious for the hours, weeks and months that Jim, Meri and Carolyne have coming up. Making landfall can only be described as magical. Despite our modern technology: the radios, GPS, heck, the charts(!) it still feels like you’ve reached back through the centuries and crossed wakes with the navigators when you sight land.

It’s not often you get to sail into your dreams and live them full on. As I picture them making landfall I can smell the floral sweet tiaré mingled with warm heavy jungle; I can hear the drums back in the hills and kids laughing on shore; And I can recall my own giddy excitement as I stepped on land after several weeks at sea only to have my legs wobble as though they were giggling in glee.
To celebrate their accomplishment I’ve been playing sailing music and dreaming about our next landfall, wherever it may be.

How sweet to see such wonderful friends; I hope Maia's playdate happens in a really fun location. Always lovely to see your photos and the family looking healthy and cheerful.

Hi Ceilydh crew - we last saw you in La Cruz a few years ago. Our boat is in Vuda Point, Fiji. We've been in QLD the past 2 weeks, as a reconnaisance prior to sailing here next year, if we still have the boat. Glad to see you are still enjoying Oz. - Mark and Vicki, Southern Cross

Hi Mark--we definitely remember you. If you're in Brissie let us know--it would be fun to see you! Thanks Lynda! It would be quite the playdate ;)

Hi, Nice blog. Sailing party with friends is very enjoyable. There are many ways by which you can spend a holiday in a sea. I hope your family have a nice time in sea.
Thanks for this post..